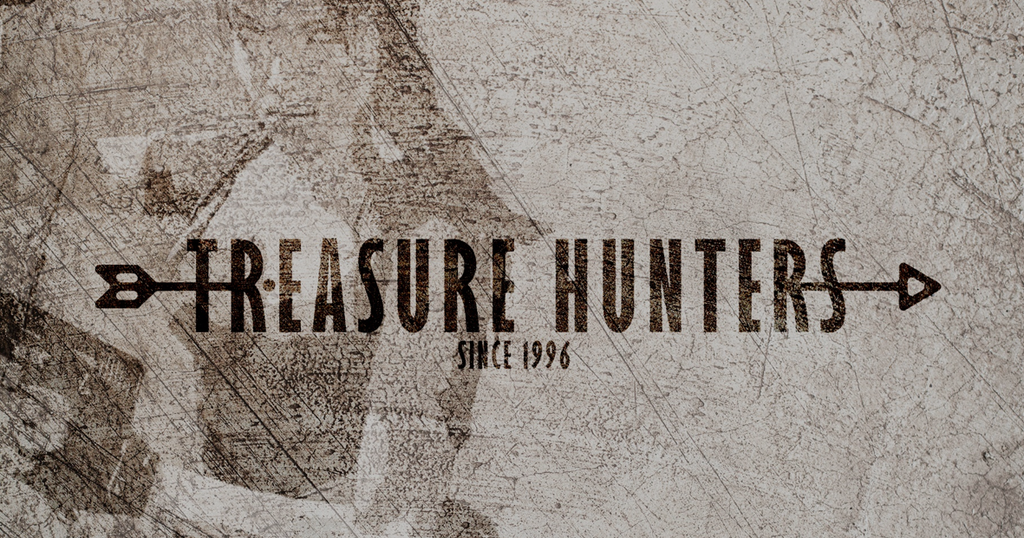 Welcome one more month to “Treasure Hunters”, this tour of the Tomb Raider license through its history told from the perspective of its most valued and rare official merchandise, where this time we will reach the end of the LAU trilogy started by Crystal Dynamics and Eidos Interactive and we will focus the facts on the video game Tomb Raider: Underworld (2008). If you missed our previous installment last month, Lara Croft Tomb Raider Legend (2006) you can take a quick look at it and join us on this adventure. Gear up with your backpack, dual pistols, and first aid kit because we're getting started!

The Californian Crystal Dynamics team accepted a new and important challenge, to give a dignified end to the trilogy that they had started in 2006 with Tomb Raider Legend and in 2007 with Tomb Raider Anniversary. The new video game entitled Tomb Raider Underworld (2008) would be the conclusion to this trilogy where the internal team had already been divided for years to be able to develop Anniversary, Underworld and the future reboot of 2013 in parallel. In addition, Underworld would be developed for a new generation of consoles: PlayStation 3 and Xbox 360 which always means extra work.

The new generation of consoles gave the opportunity for a notable graphic improvement in the title, Lara Croft went from having 6,292 polygons in Legend to 32,816 in Underworld which gave the character the 2010 Guinness Record for the most detailed video game character to date. In addition, "motion capture" was used for the first time to give Lara the feeling of a more realistic movement, to achieve this, the gymnast and stuntwoman Heidi Moneymaker brought realism and fluidity to our protagonist.

In general, the new installment of the franchise provided a good overall balance between its different elements: exploration of large settings, solving environmental puzzles, confrontations against enemies and an interesting story. All this endowed with a much improved graphic aspect and an innovative technical section for the occasion.

Tomb Raider Underworld hit the US market on November 18, 2008 and the European market on November 21, 2008, currently selling an estimated 3.8 million copies in total. The critics were diverse oscillating between 7 and 8 in Metacritic in most of its versions. Its screenplay was one of the most praised points and it received the Writers Guild of America Award nomination and the BAFTA for Best Action Game.

With the closing of the first trilogy by Crystal Dynamics, fans and critics were generally satisfied with the result and all the changes applied in the saga. Even so, after so many years of travel, Lara Croft needed to vary her formula in a significant and revolutionary way to be able to surprise again, risk and survive the generation of the moment, full of different proposals and a really very competitive environment.

After closing the first trilogy, Crystal Dynamics were ready to start a new one with big ideas in mind but requiring a larger capital investment. Therefore, it was time to consider how to carry out everything that they were already beginning to propose. In April 2009, Square Enix acquired Eidos Interactive for 84 million pounds, dragging in Crystal Dynamics and giving the studio the time and resources to produce the work they wanted without pressure or limitations.

Square Enix, with a long history behind it and founded in Shibuya (Tokyo, Japan) in 1975 (founded with the name Enix), has gone through various variations until merging with Squaresoft and acquiring the joint name that it currently maintains. This move with the purchase of Eidos Interactive was part of its strategy to be more present in the western market, interested in a franchise like Tomb Raider after all its successes in the eastern market.

Next, we take a look at these interesting objects from the period. 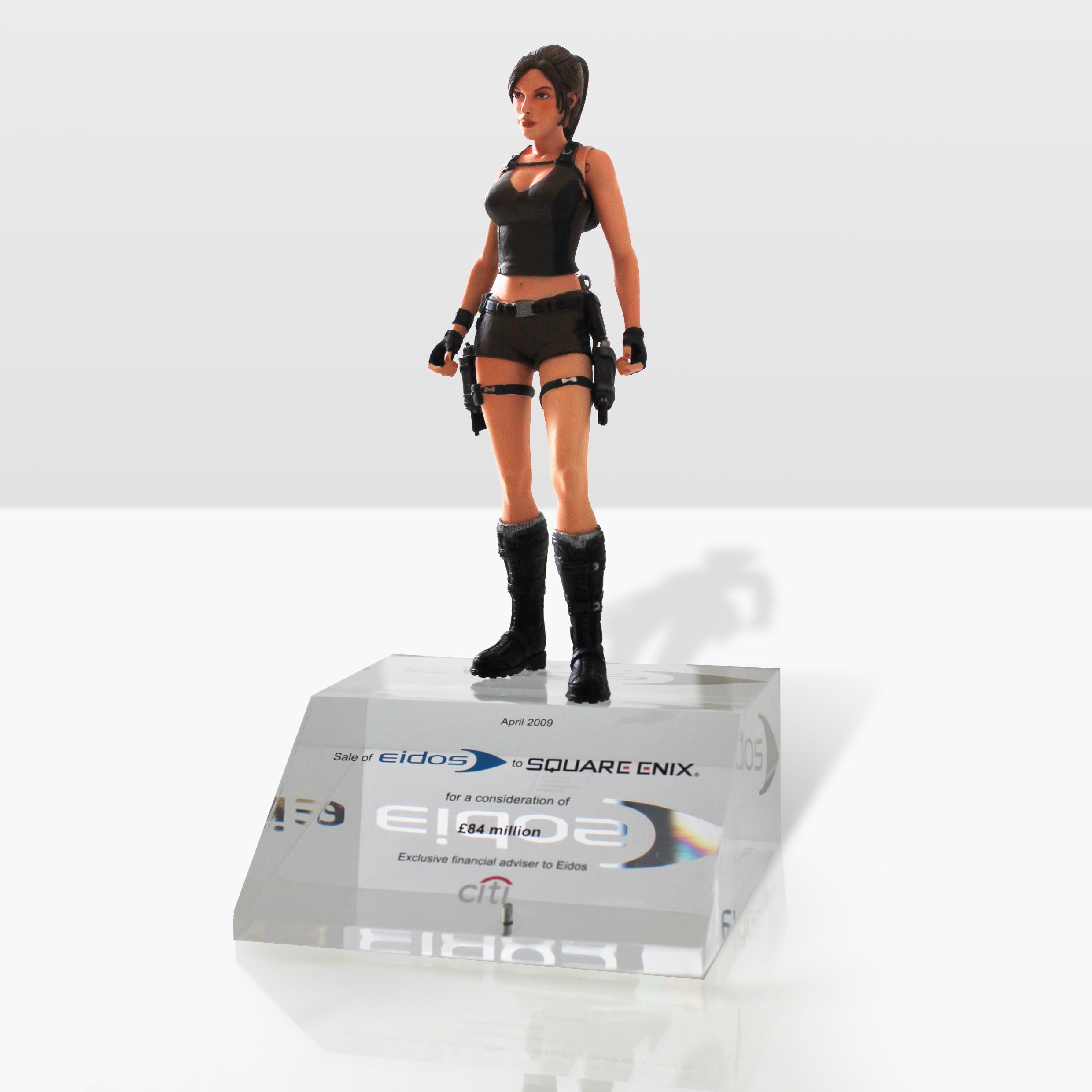 As reported a few lines above, Square Enix bought Eidos Interactive in April 2009 for the amount of 84 million pounds. This statue commemorating the sale was given to each member of the company's accounting team. The base of the statue, made of glass, reflects the logos of both companies and the final agreed price. This rare object was the cause of internal disputes at Eidos Interactive, which caused many accounting employees to throw away the statues, considering that the treatment had not been fair and the uncertainty of the continuity of their jobs in the future with the Japanese startup.

Thanks to a former employee of the accounting department, this rare object came to my collection and with it the story I have just told you about it. Interesting indeed. 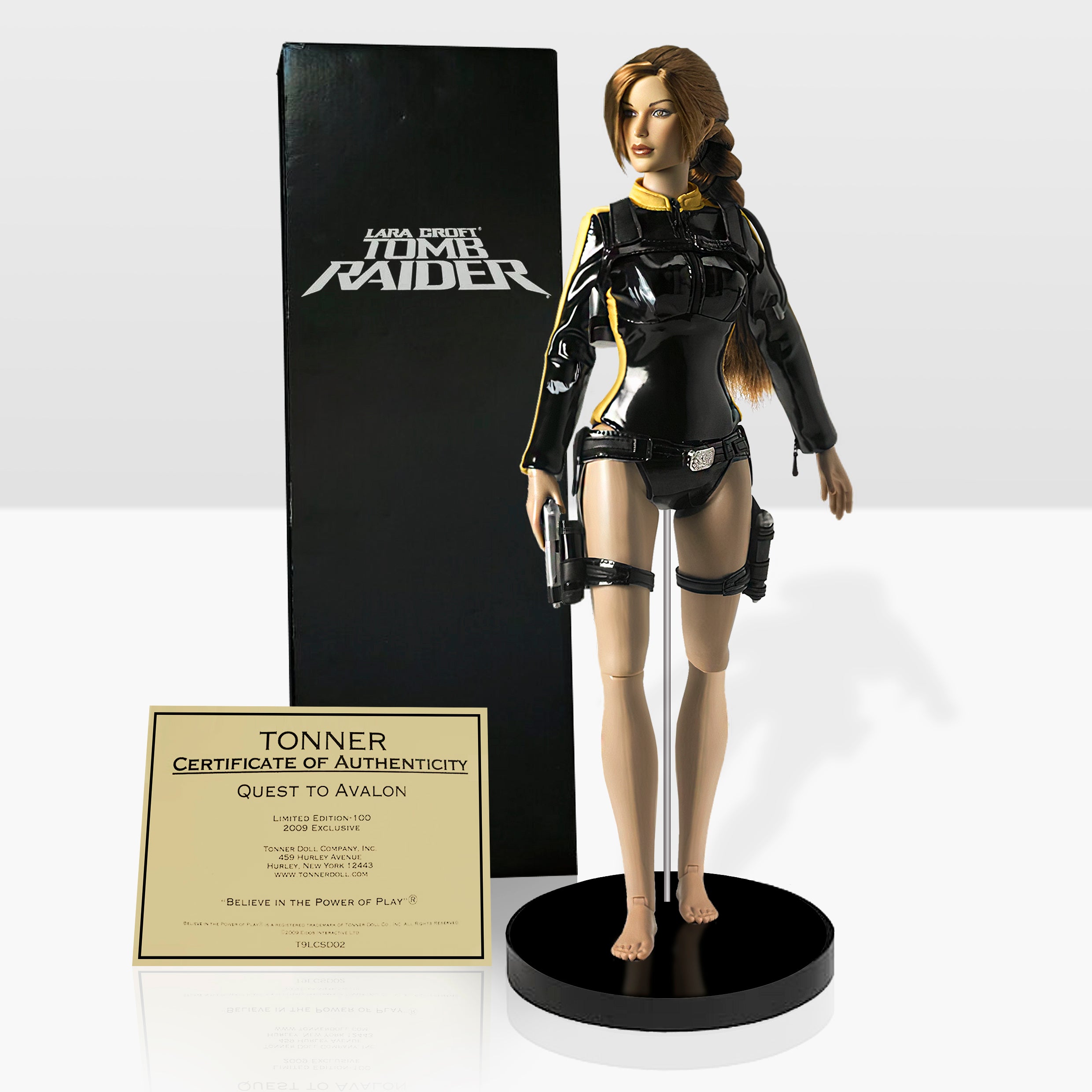 In 2008, Eidos Interactive reached a commercial agreement with Robert Tonner, American businessman, fashion designer, sculptor, doll artist and owner of Tonner Doll Company, Inc. and Effanbee Doll Company, Inc. for the realization of a doll by Lara Croft based on Tomb Raider Legend and which was presented at the Wizard World Chicago Convention 2008. The dolls were so successful   that from a minimum production of 100 units they went to 4,000 units (in the Legend model) and the models were also expanded to other outfits like Full Throttle, Classic Beauty, Amanda Evert, and Forging Exalibur.

The model we analyze above (and the one in the photo) is called "Quest to Avalon" and is the most exclusive in the collection, based on the   wetsuit that Lara Croft uses in the Mediterranean Sea at the beginning of   Tomb Raider Underworld. It was presented in July 2009 at Chicago Comic Con with a limited series of only 100 units worldwide and which also included an official certificate of authenticity. These Tonner dolls were around $ 150 in   2008/2009 although today they sometimes exceed $ 1000 at auctions. It is undoubtedly one of the collectibles that have been revalued the most and one of the most sought after. Even many well-known fans such as Laragwen or Christophe Croft have websites specialized in these dolls where they themselves have made different outfits to dress their dolls in a totally amazing way and with great detail. If you google them, you will be impressed by their creations.

Personally, it is an item that I would like to see come back in the future with new designs or even interchangeable clothing packs. I think it would be an interesting business strategy, I just pitch the idea. 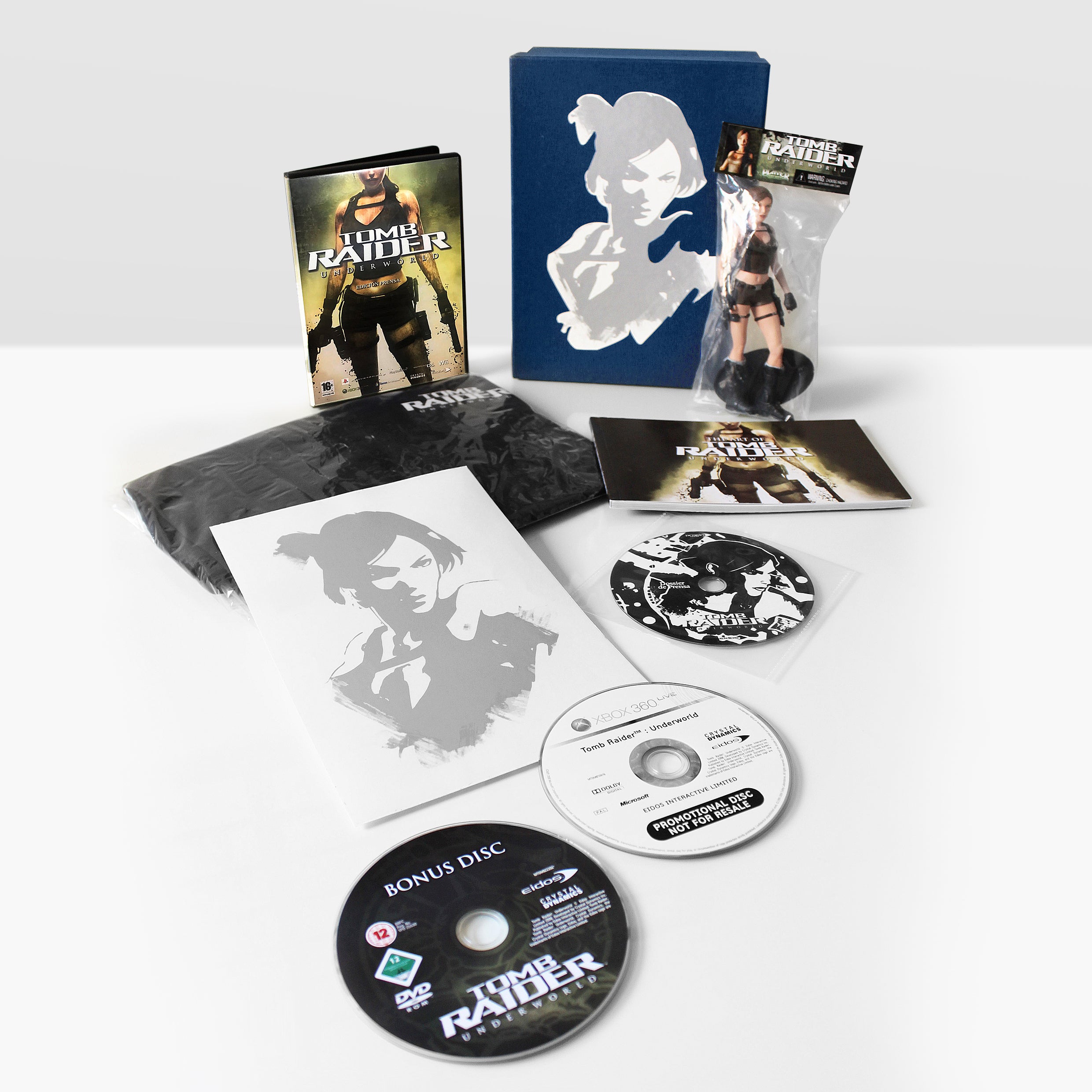 Tomb Raider Underworld Spanish press pack. This pack was given to the specialized members of the press before the commercial release of the game in order to carry out the opportune journalistic analyzes. The content of the pack comes inside a dark blue box with the silhouette of Lara Croft and includes: Lara Croft figure, concept art book, press CD with images, videos and texts for review articles, Xbox 360 version game, bonus CD with documentary on the development of the game, silver sticker of Lara Croft and game t-shirt. 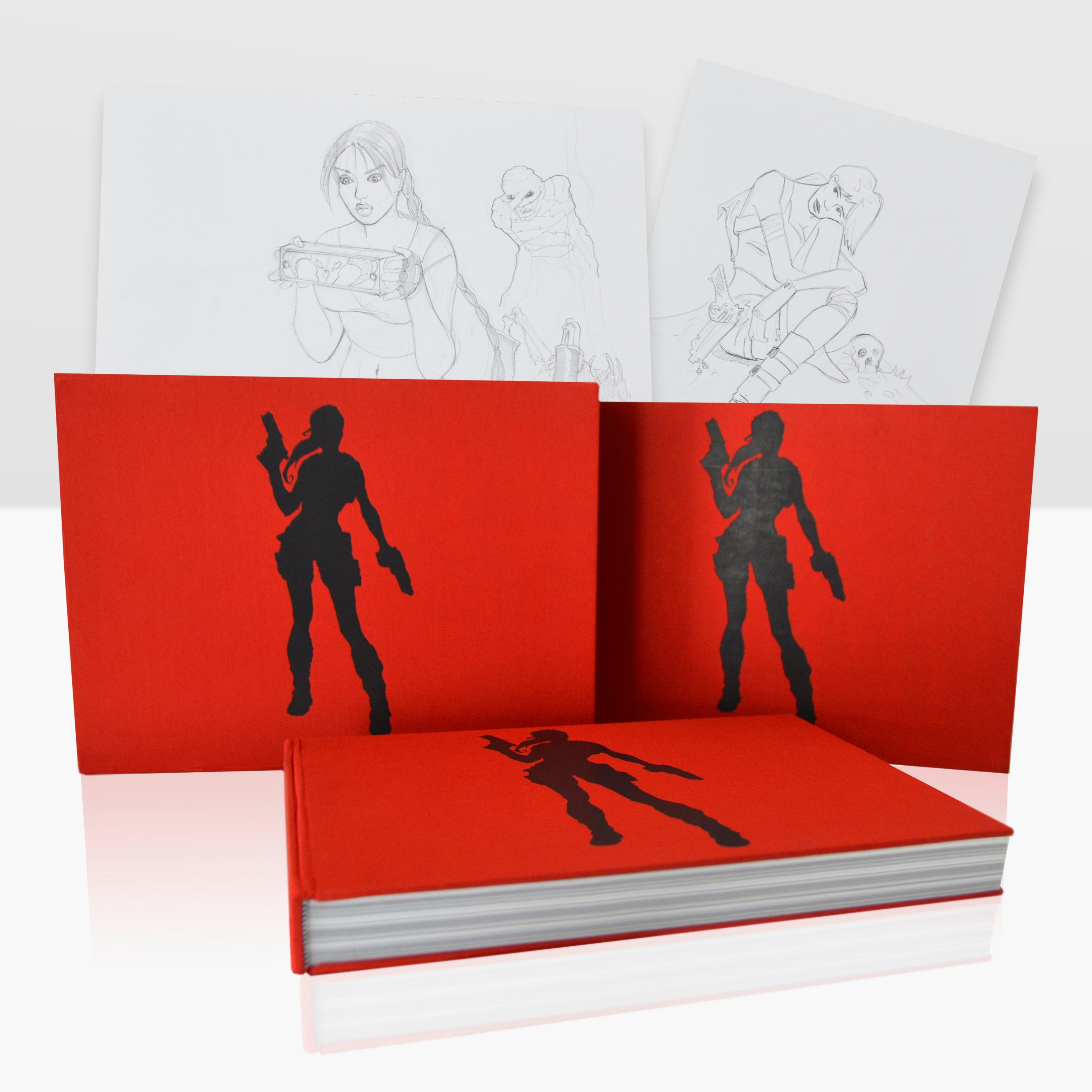 "The Art of Tomb Raider" was published by Dreams and   Visions Press on March 31, 2010 and includes all the conceptual art from Tomb   Raider 1 (1996) to Tomb Raider Underworld (2008) divided into two volumes   with 568 pages. On the one hand the Core Design era and on the other hand   the Crystal Dynamics era. Two different editions of this book were made: the   standard edition, with a cover that includes a concept art of Tomb Raider Underworld with Lara Croft in Thailand and the exclusive edition in red cover with cloth binding that we will analyze next.

The exclusive red edition is limited to only 26 units numbered with the letters of the alphabet, from A to Z. The edition that I have in my   collection is the letter "O". Each numbered copy contains two original artwork by Daniel Cabuco (who worked at Crystal Dynamics designing   the concept art for Tomb Raider Legend and Tomb Raider Anniversary) and James Kenny (who worked for Core Design designing the concept art for Tomb Raider The Angel of Darkness). Additionally, each exclusive copy is signed in person by Lara Croft creator Toby Gard.

Personally, this book is the most wonderful ever created on art in the franchise with a very complete journey, full of nostalgia and pieces   printed in a very high quality, heavy sheet weight and finish. If you are a   collector, I highly recommend that you have this book that will undoubtedly surprise you. It is simply spectacular, even if you are not a collector, you will appreciate it, it is a pleasure for the senses. 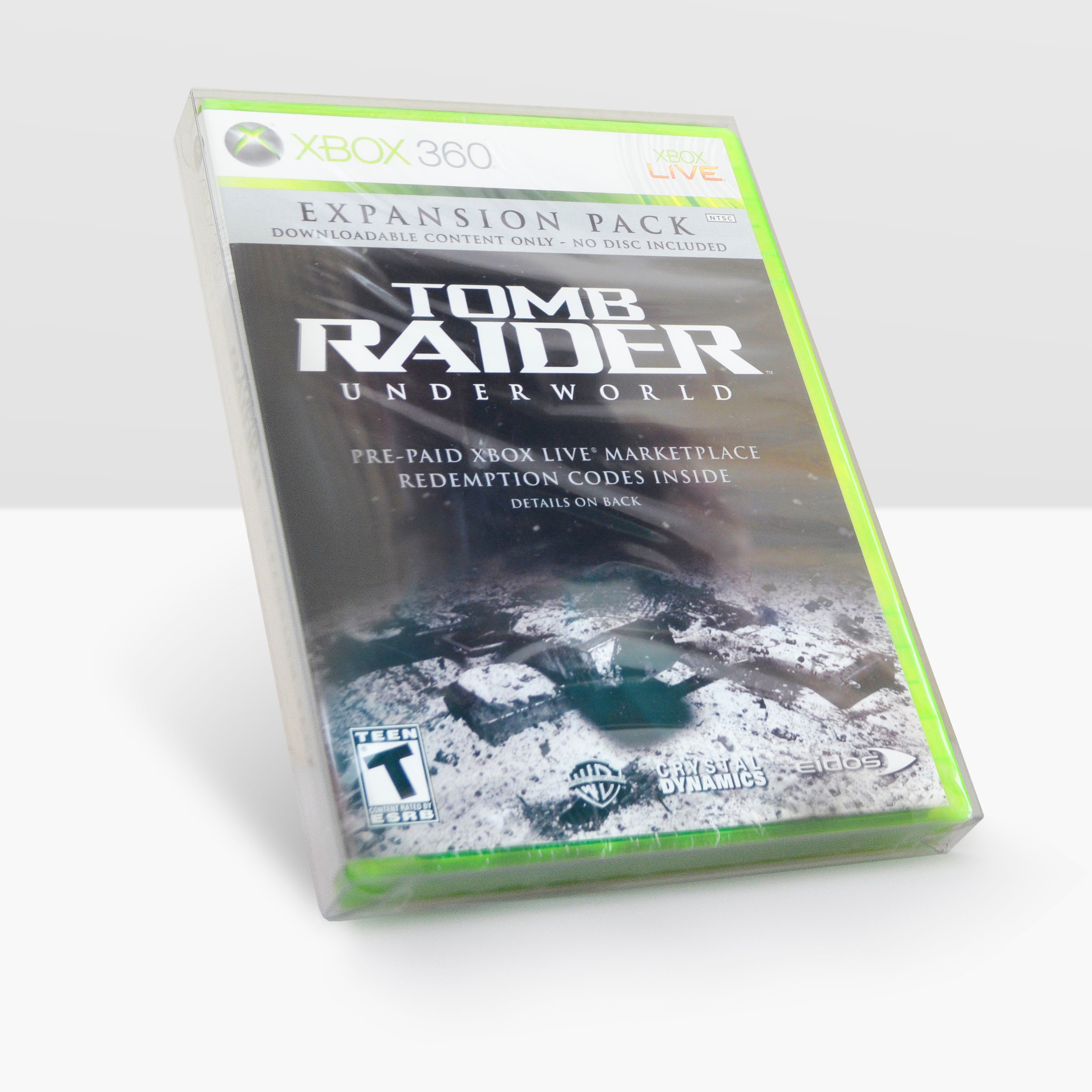 Physical edition of the DLC of Tomb Raider Underworld, “Beneath the   Ashes” and “Lara's Shadow” for Xbox 360. This rare edition contains the   download code of the level extension of Tomb Raider Underworld and is really almost impossible to obtain nowadays, in general, the extra levels were sold exclusively as downloads. This edition with its corresponding box is at least curious and a very interesting object for collectors. 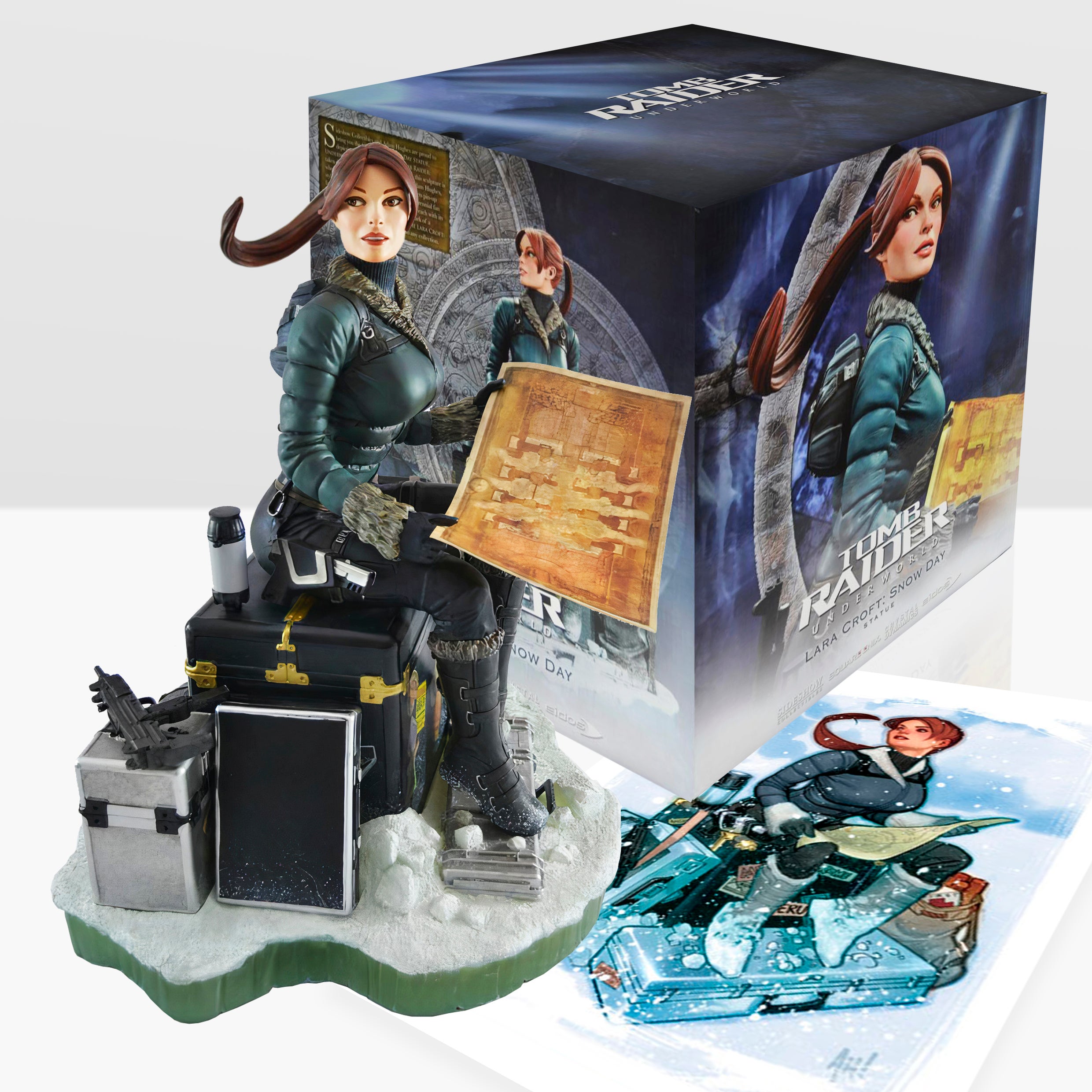 The partnership between Eidos Interactive, Sideshow Collectibles and Adam Hughes cannot be anything other than synonymous with absolute success and thanks to this, this incredible statue based on Tomb Raider Underworld was born with an original design by American comic artist Adam Hughes (and one of my favorite artists, I must confess). 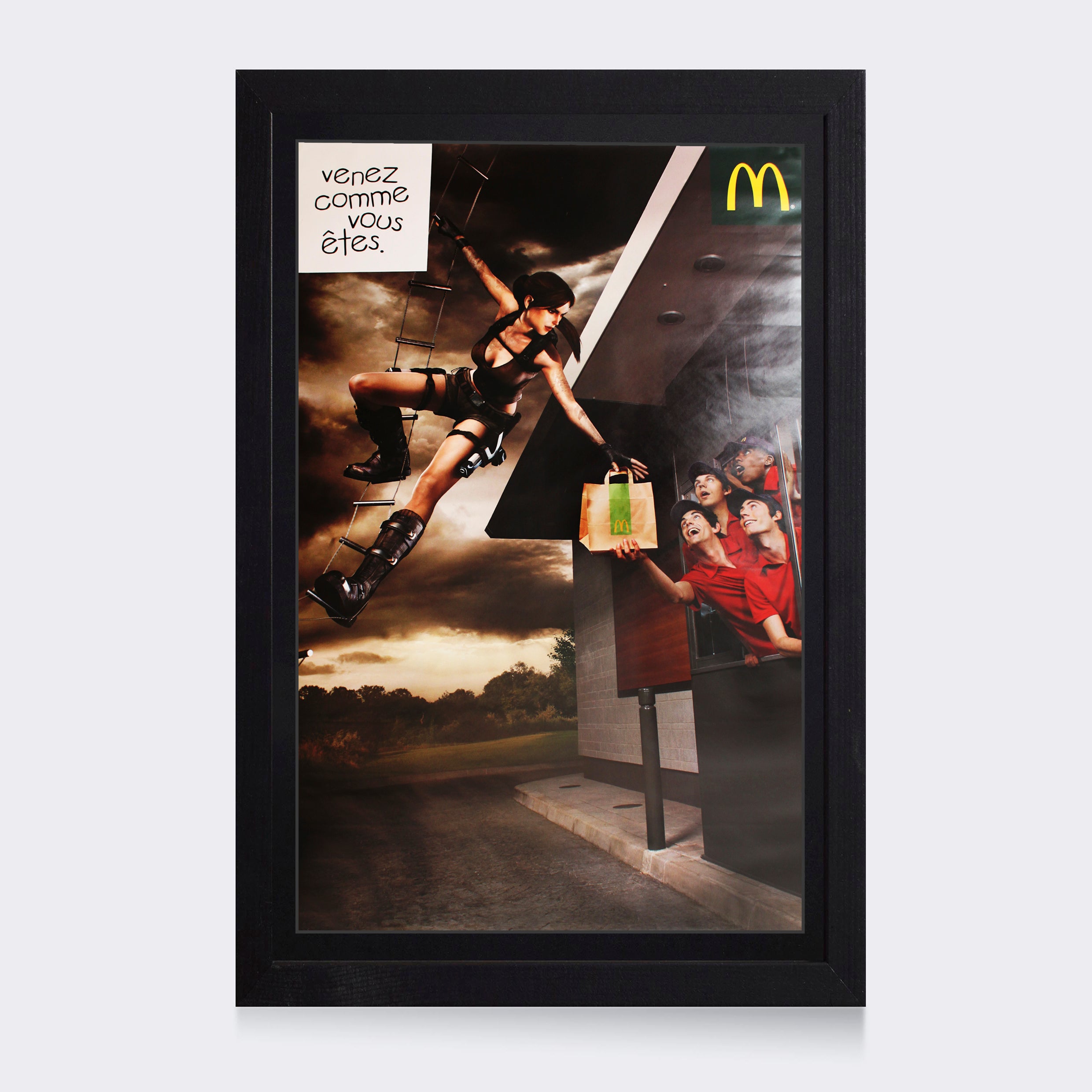 Poster for bus shelters from Lara Croft's campaign for McDonald's   carried out in France in 2011. Under the slogan: Venez comme vous êtes (Come as you are).

McDonald's France was looking for a campaign with highly   recognizable popular culture characters to visit its establishments,   therefore, Lara Croft was chosen as one of them along with other characters such as: Tin Tin, Cinderella, Asterix & Obelix, Ghostface - Scream, Darth Vader, King Kong and Taxi. Each of the characters had their own advertising poster. 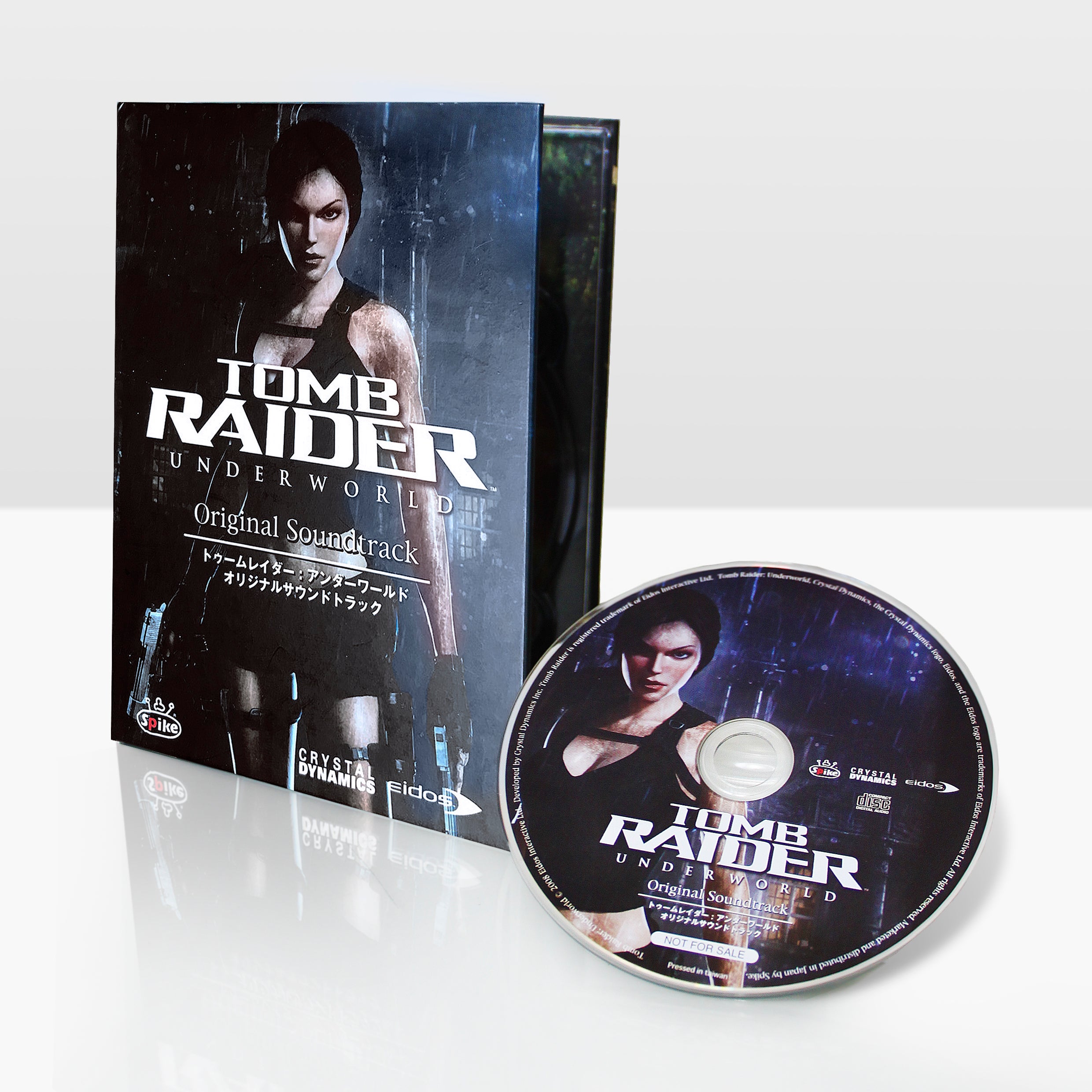 Original Soundtrack of Tomb Raider Underworld in Japanese version that was given with the reservation of the game in Japan. The CD, wrapped in a high quality hard sleeve case, was produced by the Spike company in collaboration with Crystal Dynamics and Eidos Interactive. It contains a total of 10 songs that I will list below:

And here ends this particular tour of Tomb Raider Underworld. I'm Rodrigo Martín Santos and if you like Tomb Raider and / or collecting, I encourage you to follow me on my website https://www.tombraidercollection.com/or through Facebook. Next month, and as can be expected, we will be analyzing the reboot of the franchise made by Crystal Dynamics, Tomb Raider (2013), a journey through survival where we will rethink whether we like or hate tombs. Do not miss it!