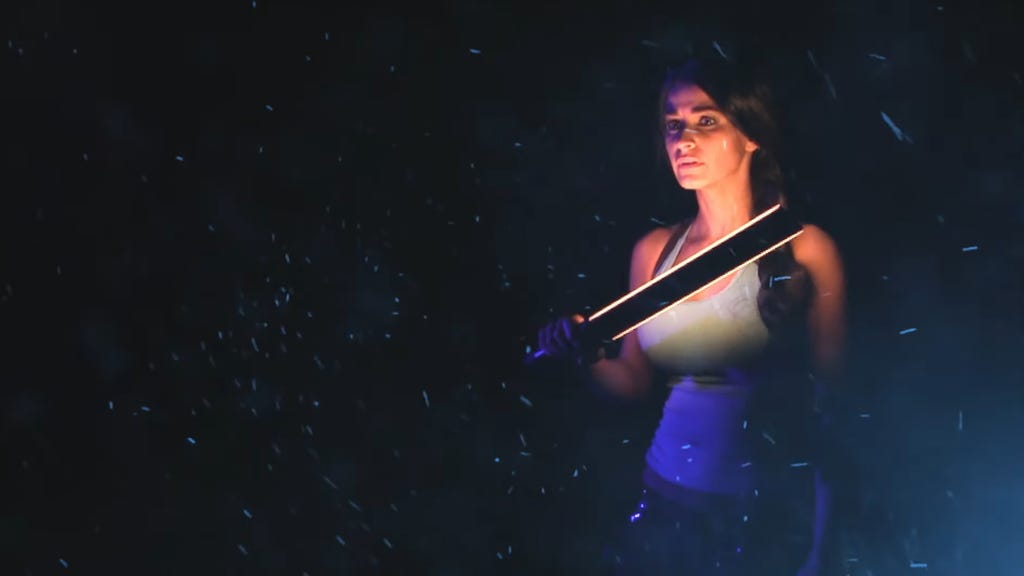 Hello there! It’s your resident film enthusiast, Kate, here again! Who wants more fan films? We entered a new era in Tomb Raider’s history  with Legend, the first game to come from  developer Crystal Dynamics after the franchise moved to the US.

Lara once again had a lighter personality, her witty and sometimes disarming one liners performed  by English television actress, Keeley Hawes. This would be the first of five games she would  portray her character in. Lara’s backstory had been revamped, inspired by the recent films starring  Angelina Jolie.
This set up a more personal plot for what would become a trilogy that included Crystal’s own take  on the original game entitled “Tomb Raider: Anniversary”.

As there is no dedicated month for this game in the celebrations, you’ll be getting two in one for  this month’s fan film feature, as well as next month. To start us off, we have….

A new take on the original game as if Lara’s adventure in The Lost Valley took place in the  rebooted universe with her friend Jonah Maiava by her side and a bit of the Legend trilogy thrown  in too.

After a long and difficult production process during the pandemic, “Power of Atlantis” had it’s  world premiere on the 14th of August at Covington Comic Con in Tennessee. It was attended by some of the cast and crew and the film was met with a positive reception.

We are also treated to a lovely opening scene featuring Lord Richard Croft played by John Wood  and young Lara played by Jessamyn Romines, a star in the making, I’m sure!

“Tomb Raider: Voice From Beyond” (US)
Written and Directed by Adam Thede
Starring Jennifer Grimes as Amanda Evert and Rama Montakhabi as Lara Croft

Amanda finds herself in a position where she can’t rely on Lara to help her and must put  everything she learned from her to use in order to save herself.

We were first introduced to Amanda in a flashback in Legend. We know she worked with Lara and  if you’ve played the games, you know what became of her. However, it’s never explained how  they met. This film explores that.

Having been a fan of the rebooted games, Thede decided to do his research on previous  instalments and was inspired to create his own story by addressing the argument that this version  of the character was and remains a positive role model, not just a sex symbol. The way he tackled that was really interesting in that Lara’s character takes a back seat. This is very much Amanda’s story as she learns that she can also be the hero.

Shortly before it’s release last year, I had the pleasure of interviewing Adam and Rama for my  blog. Check it out here to learn more and see some exclusive behind the scenes content.

Also, keep an eye out for the sequel “Raiders: Croft vs Jones” coming soon if, like me, you’ve  always wanted to see this crossover happen!

Lost in the jungle with no way of contacting the outside world, a weary and jaded Lara begins to  contemplate the future and if it’s time to retire. In Legend, we meet Lara in her early 40s so it’s great to see how Lara might become tired of the  adventuring lifestyle. A very original idea, nicely executed!

Did everyone enjoy the LAU months? Well, we’re not quite finished celebrating  “Tomb Raider: Anniversary” yet! Enjoy our next selection of fan films!

In 2017, a group of students from a creative arts university in Surrey, coincidentally where Lara  herself is from, ventured to Almeria in Spain to shoot an ambitious short for their course. After the original location fell through just the day before the shoot and some drastic last minute  changes to the script, the filming took place at the picturesque “Alcazaba de Almeria”. Despite the many setbacks, the team still managed to pull off an impressive looking film that felt  very reminiscent of “Tomb Raider II” in parts!

Crossdale, who beat over 40 other actresses for the role, delivered a great performance  combining the toughness of classic Lara and the more grounded humanity of reboot Lara!

After the release, I had the chance to interview director James Ashley and his partner in crime  Dylan Jones to get more insight into their process. Check it out here where you’ll also find some exclusive behind the scenes stills.

“Tomb Raider: The Journey” (US)
Written, directed by and starring Tatiana Neva

Lara goes in search of an artefact from a story her Father told her as a child.

Tatiana Neva is an actress and martial artist who you may recognise from her work with “Bat in  the Sun” - for whom she had portrayed other iconic characters such as Wonder Woman, Black  Widow and Catwoman. This time, she took on the role of Lara Croft as well as writer and director  for a tribute to “Tomb Raider.” The in-game aspect inspired by the LAU trilogy is fun to watch as is  the action! There’s also a nice twist at the end.

There’s an explosion at the manor and something else lurks inside… Now we come to Underworld and a fan film inspired by one of most famous parts of the game! I’ve admired Kara and Lili’s work for a long time now and it was a pleasure to see them collaborate on this project! The abandoned hospital that serves as Croft Manor, post explosion, and the camera work create a perfectly creepy atmosphere! The accuracy of the costumes is also fantastic!