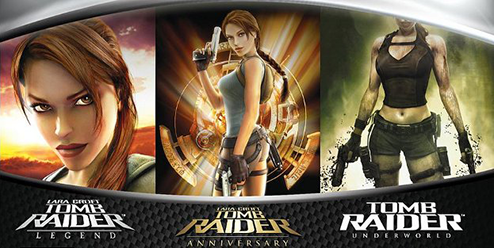 Beyond the Cover: LAU Trilogy

Hello Tomb Raider community! Welcome again to BEYOND THE COVER. In this new issue, we’re going to discover some of the most special covers of Tomb Raider: Legend, Tomb Raider: Anniversary and Tomb Raider: Underworld.

In this blog we not only talk about two impressive games, but also about the transition of Tomb Raider from Core Design to Crystal Dynamics, its current developer studio. Tomb Raider: Legend was a before and after with a renewed Lara Croft who returned to the exploration of total tombs and recovered acclaimed characteristics such as the double pistols, the archaeologist's moves (now improved) and the Croft Manor, among others. After three long years since her last game, Lara Croft was back stronger than ever in one of the best-rated games in the franchise, with various locations and new mechanics well adapted to the new consoles. On the other hand, Tomb Raider: Anniversary reminded us of the beginning of Tomb Raider with some changes, but a unique essence in one of the best video game remakes ever made. And finally but not less important, the final installment of the trilogy with Tomb Raider: Underworld, a milestone to the series before the reboot of 2013, five years later of LAU trilogy ending.

Tomb Raider: Legend was released on April 7, 2006, for PlayStation 2, Xbox, Xbox 360, GameCube, PC, PSP and Nintendo DS. In a race against time, Lara must travel across the globe to unearth history's greatest weapon. A legendary artifact of such immense power it could threaten humanity's very existence. Take Lara back to the Tombs with totally new moves and hi-tech gadgetry in her most explosive adventure ever.

Tomb Raider: Anniversary was released on June 1, 2007, for PlayStation 2, Xbox 360, Nintendo Wii and PSP. The remake of the original Tomb Raider gave meaning to the new and first trilogy of the franchise developed by Crystal Dynamics, where we must confront Natla again as we try to recover the pieces of an artefact known as Scion.

Tomb Raider: Underworld was released on November 18, 2008, for PlayStation 3, Xbox 360, PC, Nintendo Wii, Nintendo DS and PlayStation 2. Explore everything. Stop at nothing. Embark on a perilous journey around the world to uncover the secrets of a forgotten power that, if unleashed, could lay waste to all civilization. Experience a new level of challenge and choice in this epic tomb raiding adventure.

Time to start! Here we go with a personal selection about the most curious covers/editions of Tomb Raider: Legend, Tomb Raider: Anniversary and Tomb Raider: Underworld! 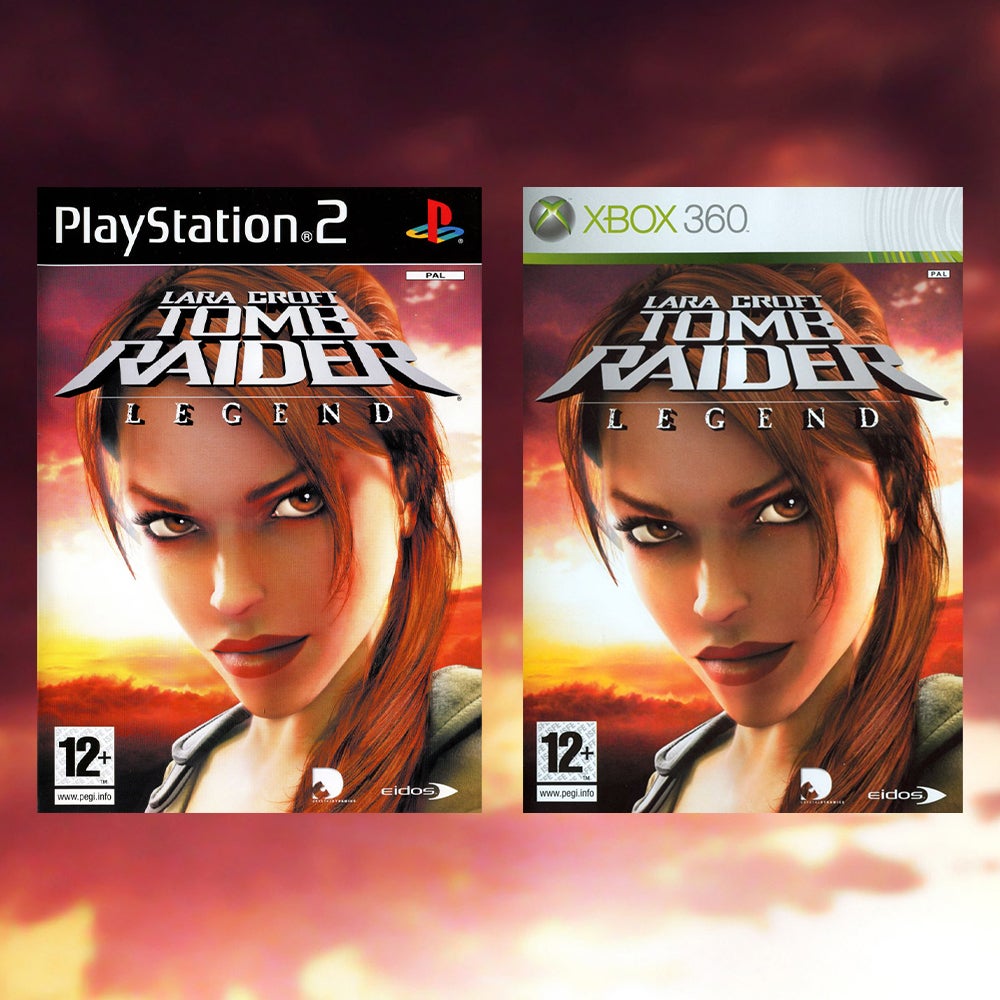 Tomb Raider: Legend was the first game to come out on many new platforms, including Xbox 360. Here we can see the two main versions: PlayStation 2 and Xbox 360 (also available for Xbox).

The face of a renewed Lara Croft is in the foreground. This model, completely new after the development of the franchise to Crystal Dynamics, was a before and after in the video game series.

Between the European and American versions, we can see a slight change: one of the images is darker and more distant than the other, but both maintain the same cover art. 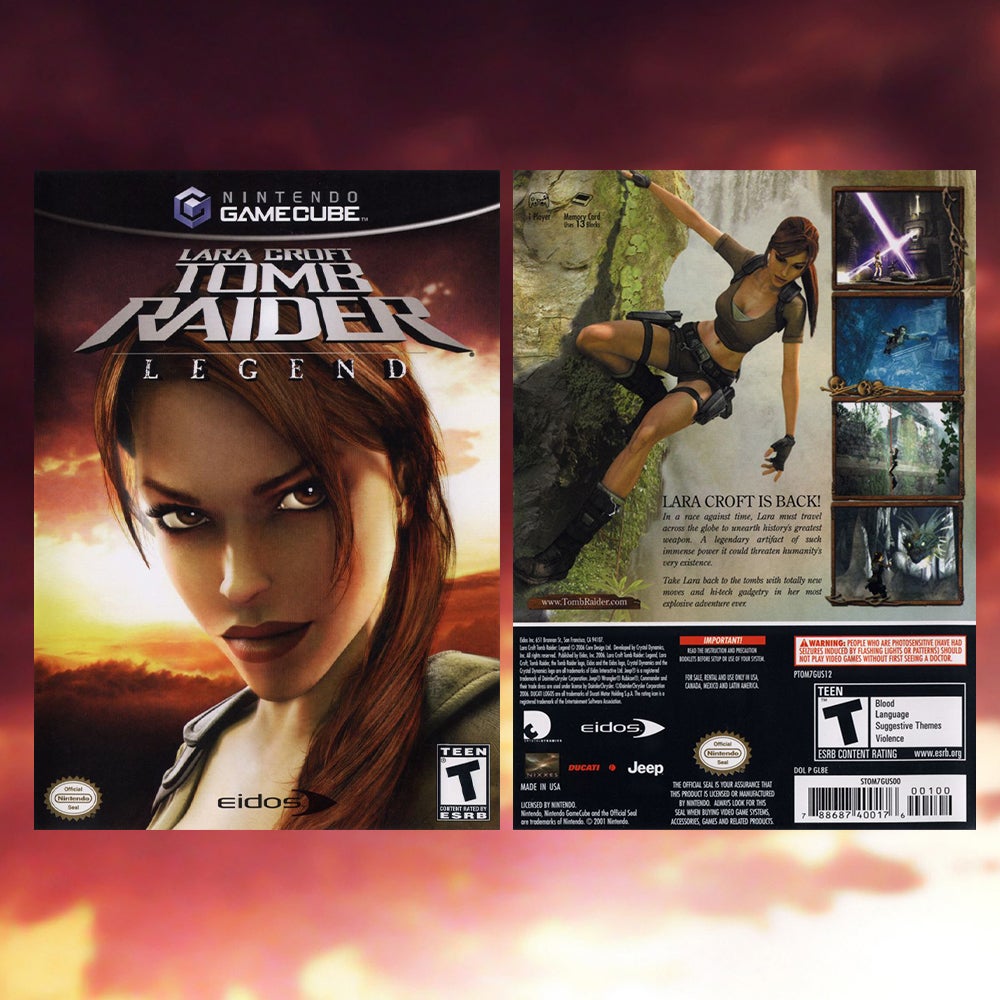 A new version that also made its debut with Tomb Raider: Legend was the Nintendo GameCube, Nintendo's home console before focusing fully on the Nintendo DS (which was already on the market).

However, it was the first and last game that came out for this platform since its commercialization was about to end at that time. 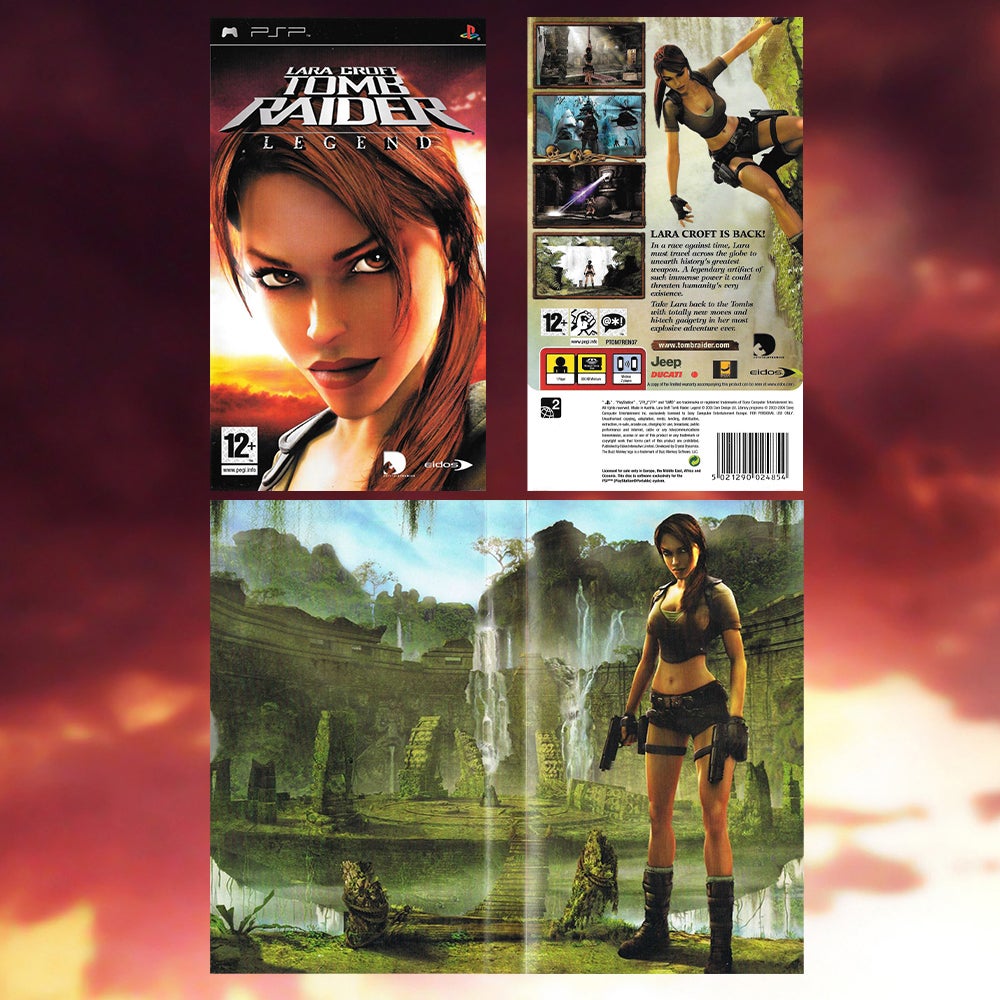 The PSP also joined Tomb Raider with Legend, the PlayStation's handheld console that had a truly impressive catalog of games to play on the go.

This edition, together with the one that we will see below, marked the first appearance of Lara Croft in a portable console format, being able to enjoy her most recent adventure (at that time), everywhere. 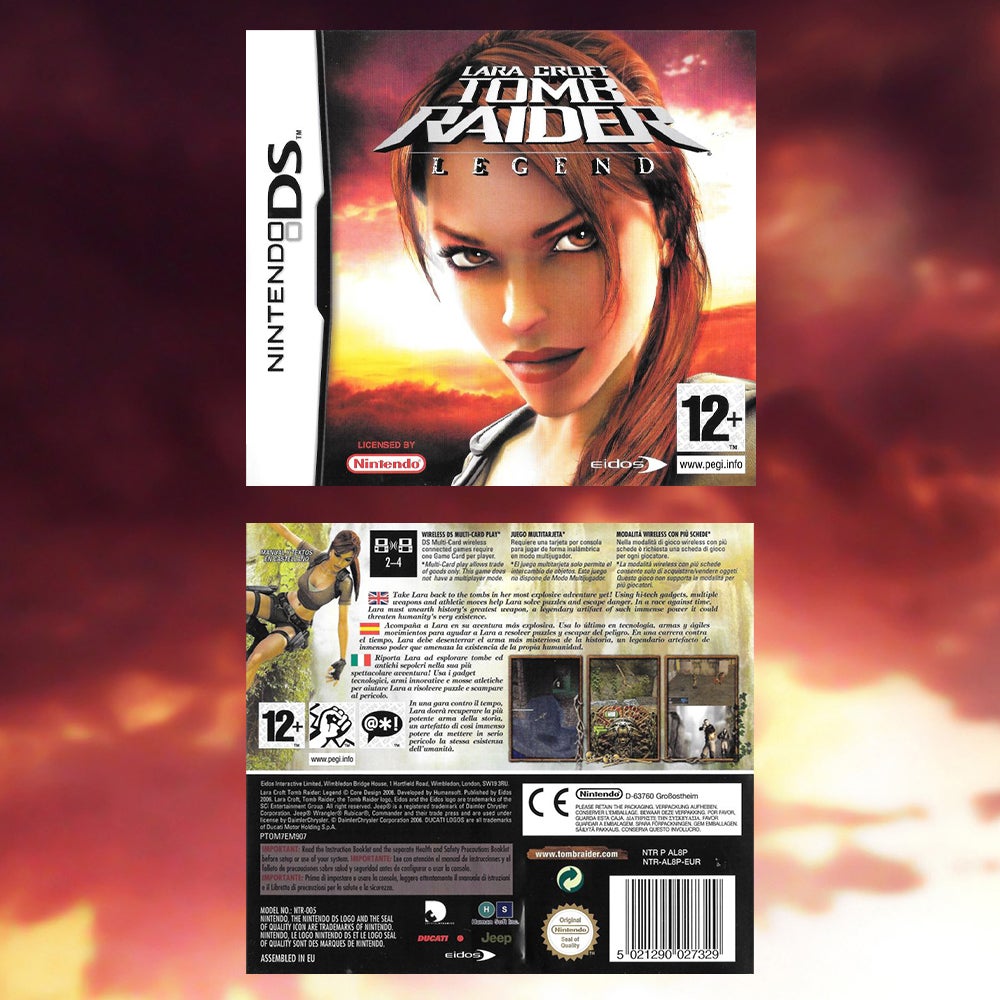 And here is Tomb Raider: Legend for Nintendo DS! This version was very different from the rest, even the PSP, adapting a style of play more focused on the Nintendo console and its touch functions.

Actually, it can be said that, although it is the same game, it is a totally different experience from the original Legend, so it is very interesting for fans. 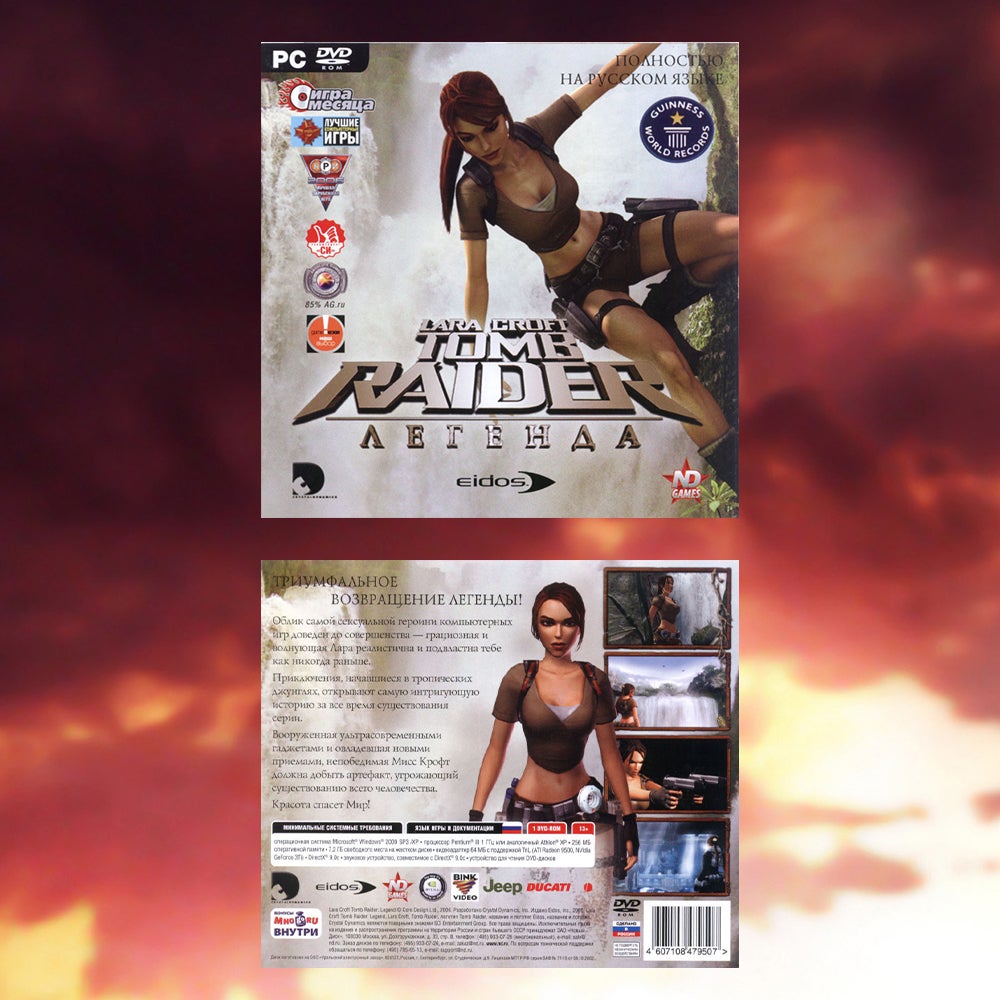 Like several months ago, the Russian PC editions are ones that always must be in these blogs. Its beauty and art difference with other versions, makes its maintenance mandatory.

Both the front and back covers (which are a perfect fit in terms of design) add a touch of fresh air to covers with the same image. 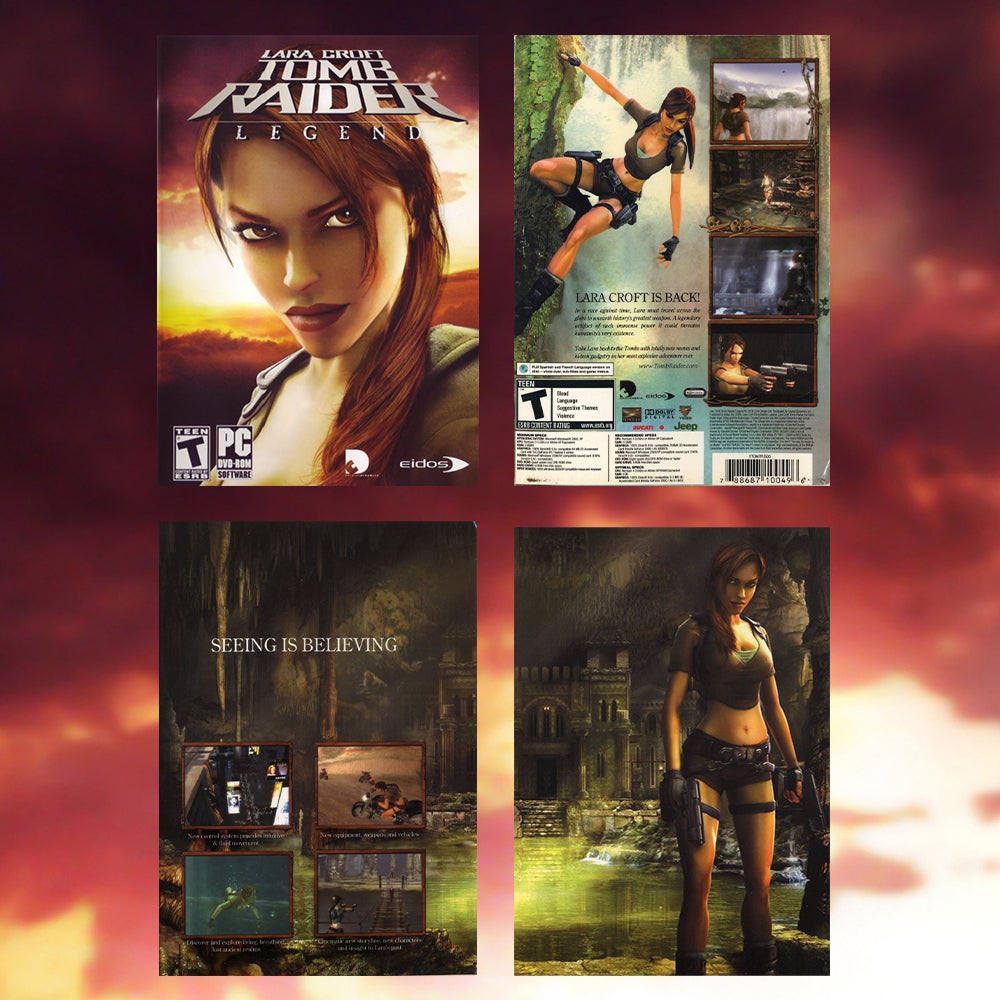 To finish the first part of the blog dedicated to Tomb Raider: Legend, we have a PC edition with a cardboard slipcase. Inside, you can see an art of the game with several screenshots.

An edition that also had the PlayStation 2 version (although somewhat different) and whose marketing was mainly focused on the United States and the United Kingdom. 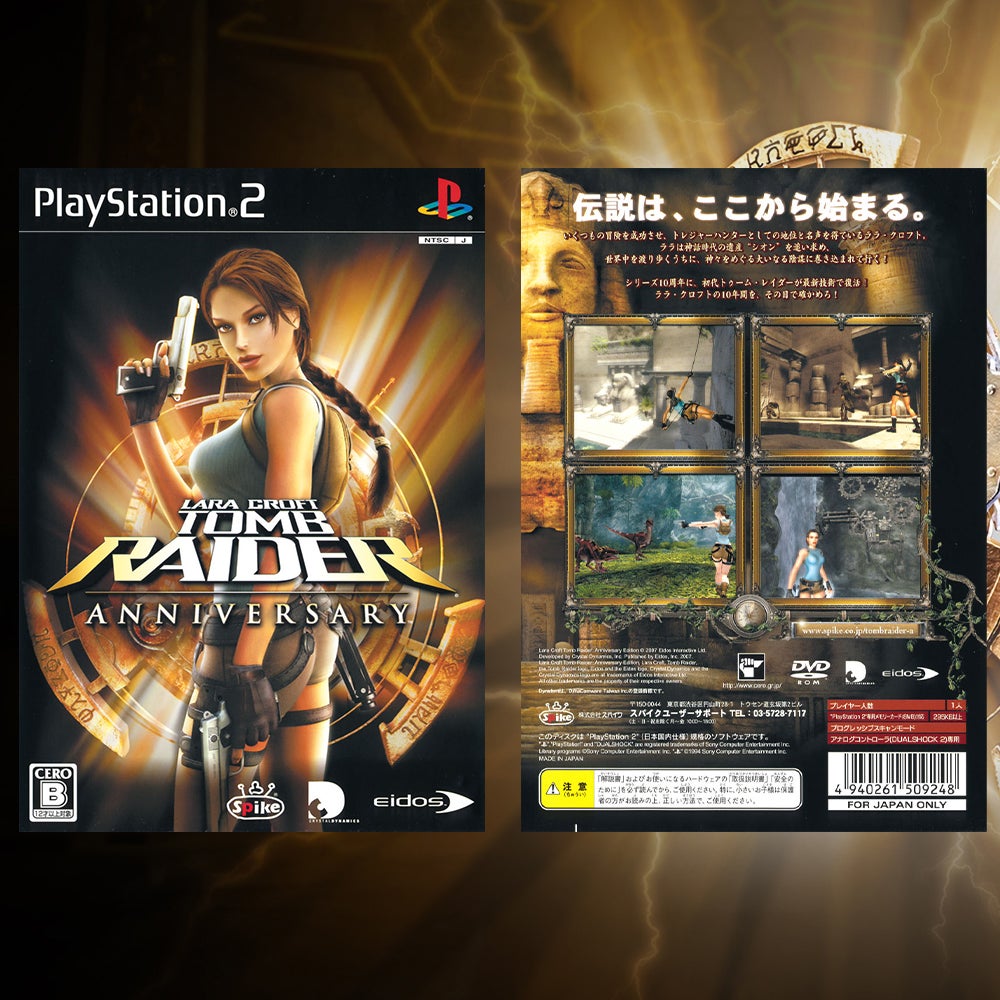 Time to talk about Tomb Raider: Anniversary! In this second part of the blog, we can find different editions and talk about the new platform that joined the franchise.

This Japanese edition of PlayStation 2 is very similar to the European and American versions. Since The Angel of Darkness, that big difference between the regions has been lost, but a version with all the Japanese typeface is pretty to know at because of its exotic nature. 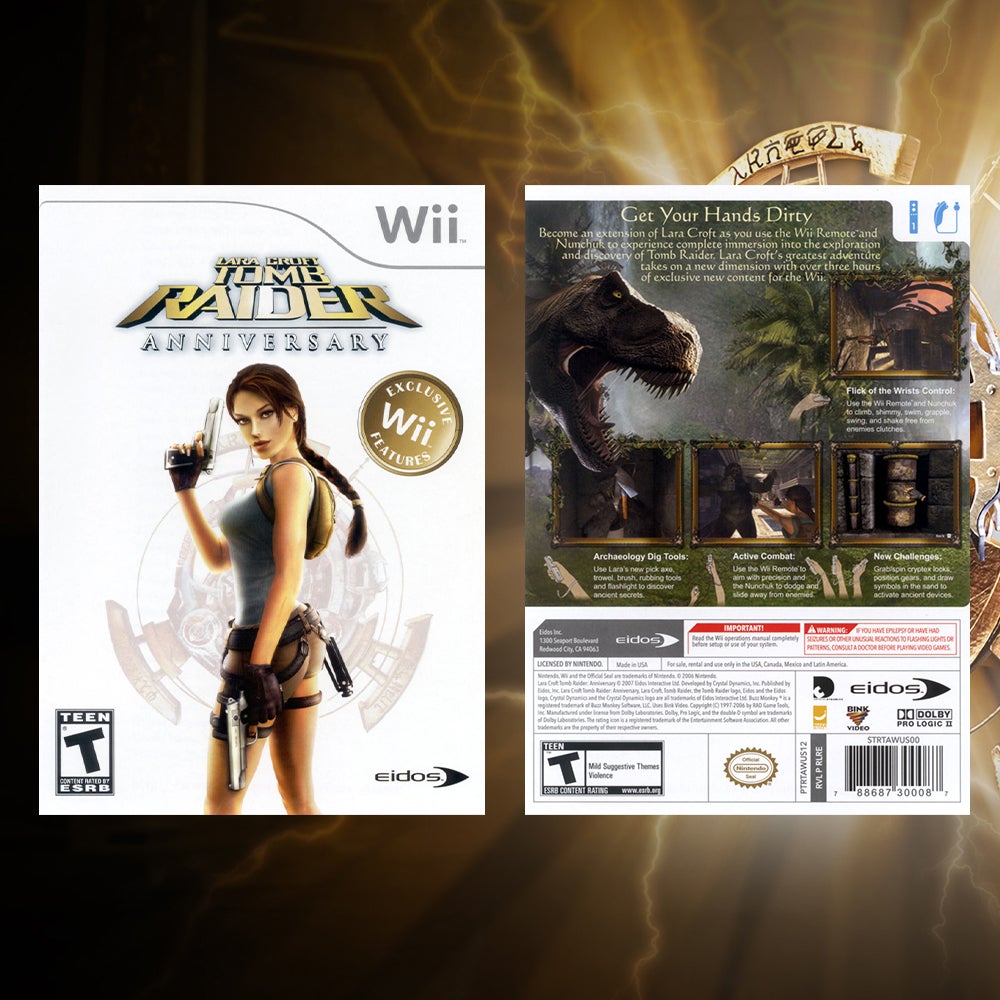 Tomb Raider: Anniversary was part of the Wii phenomenon with a very different edition from the rest of the consoles in terms of gameplay.

This first and last release included new features unique to the Nintendo platform (primarily related to movements and Wii controls) and a new room in Croft Manor, among other things. 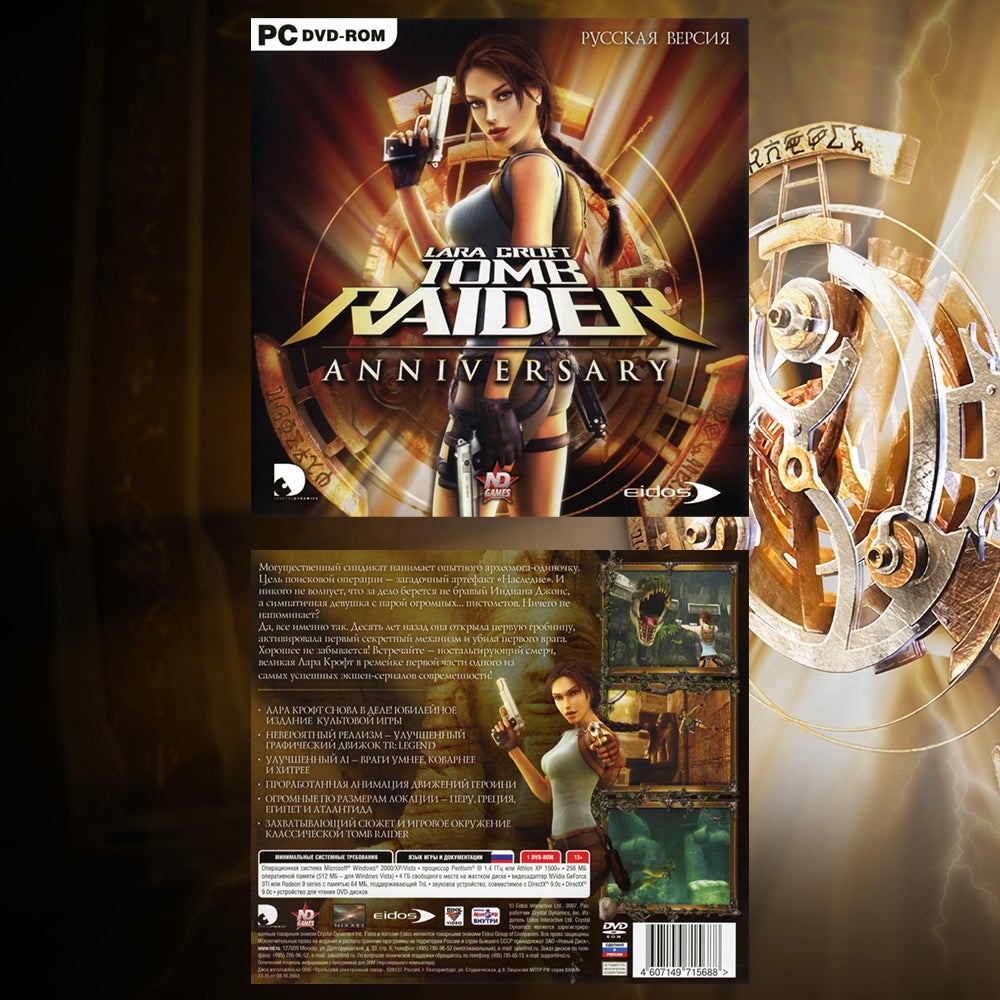 We return to Russia! This time with Tomb Raider: Anniversary. However, this time the front cover is identical to the rest of the editions: Lara Croft posing with the double pistols and the Scion behind.

What does change is the design of the back cover, both due to the rendering of the game and the immense text with the characteristics of the game. 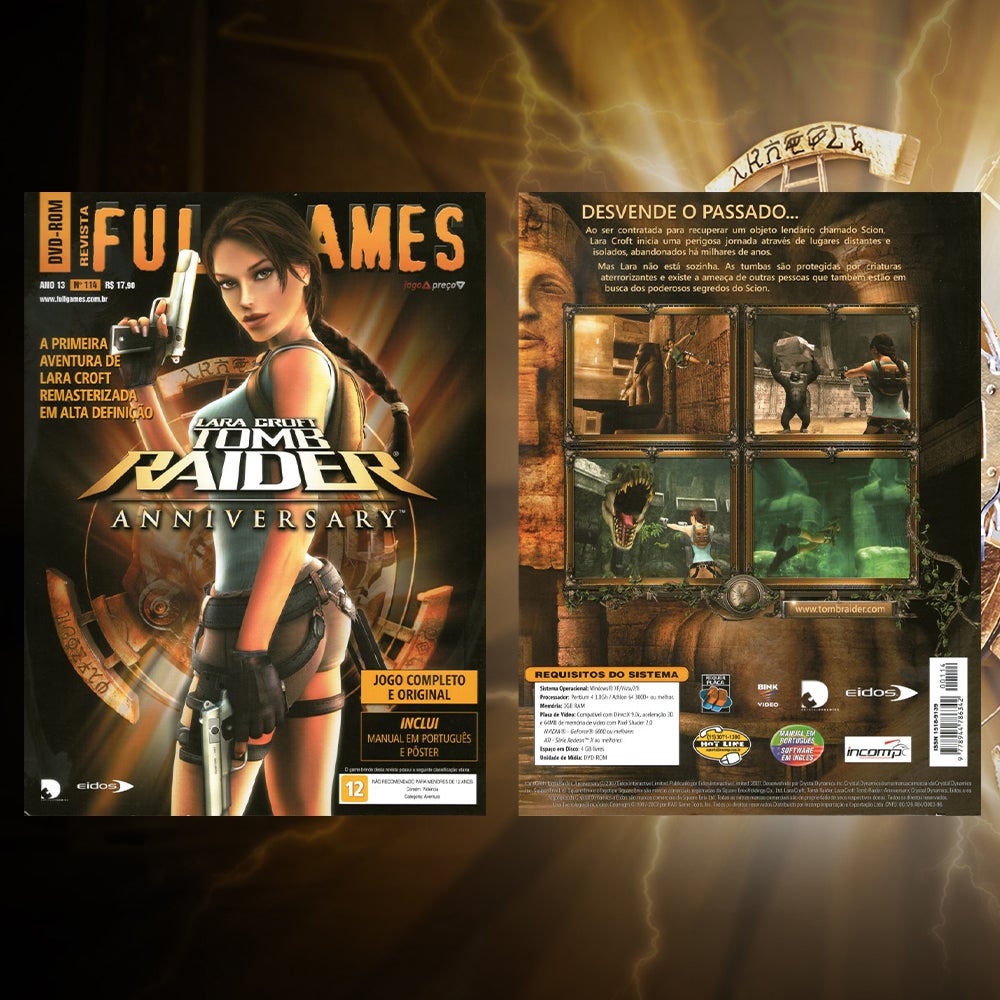 This curious edition of Tomb Raider: Anniversary only and exclusively for Brazil was published as part of a gift for the purchase of FULL GAMES magazine.

It is a full version for PC in a DVD box and localized to Portuguese, being one of the various editions that was not part of the retail sale but as a promotional gift. 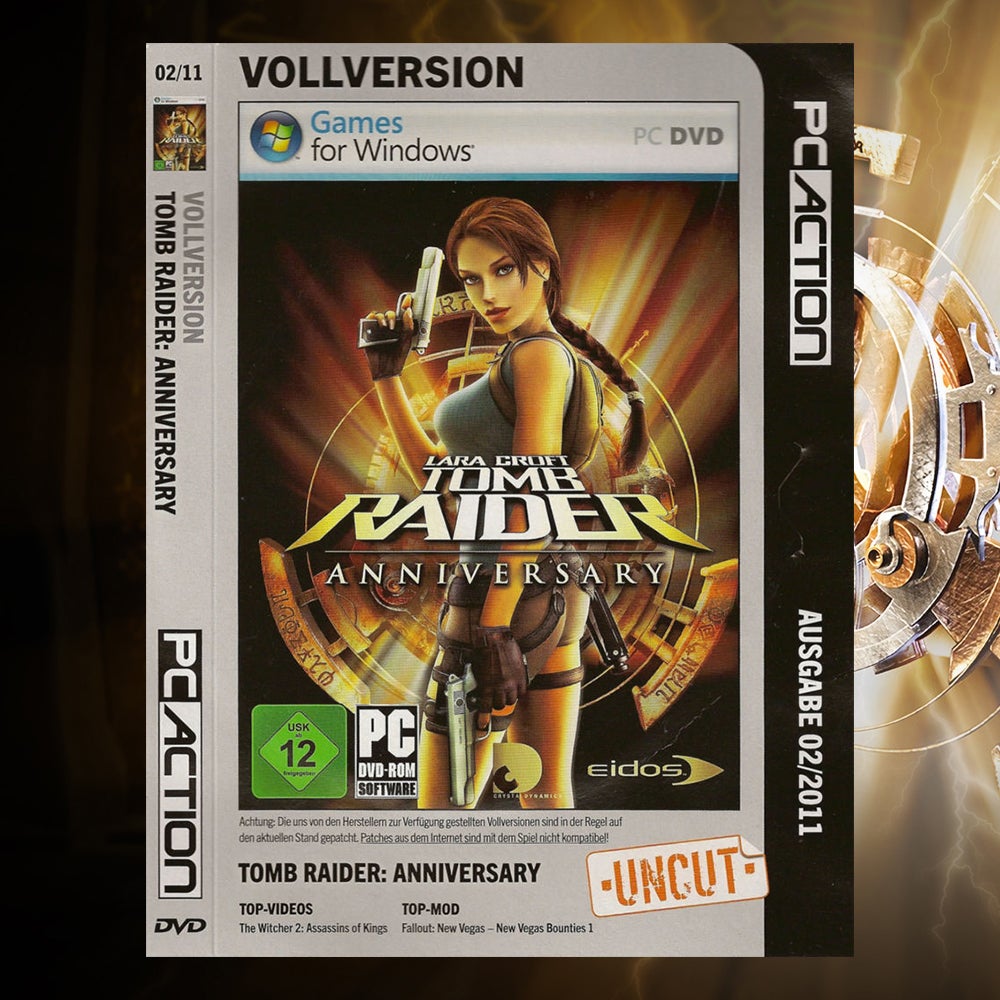 Following the model of the previous edition, here we have a promotional version of Tomb Raider: Anniversary offered in a magazine from Germany.

This uncut edition was given away in February 2011, almost four years after the game was released on the original platforms. 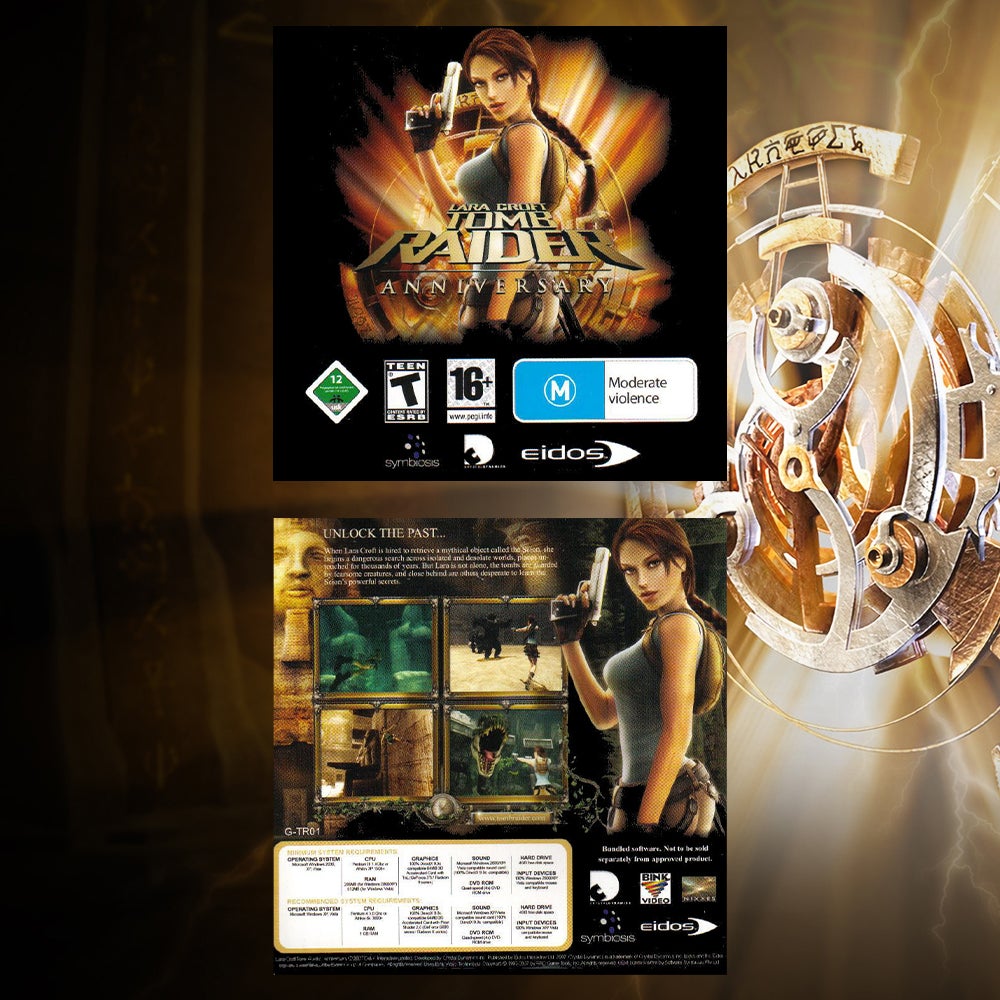 To close this game, the Tomb Raider: Anniversary promotional copy (probably) best known to all fans and collectors. It was given away as a software bundle when purchasing PC equipment. 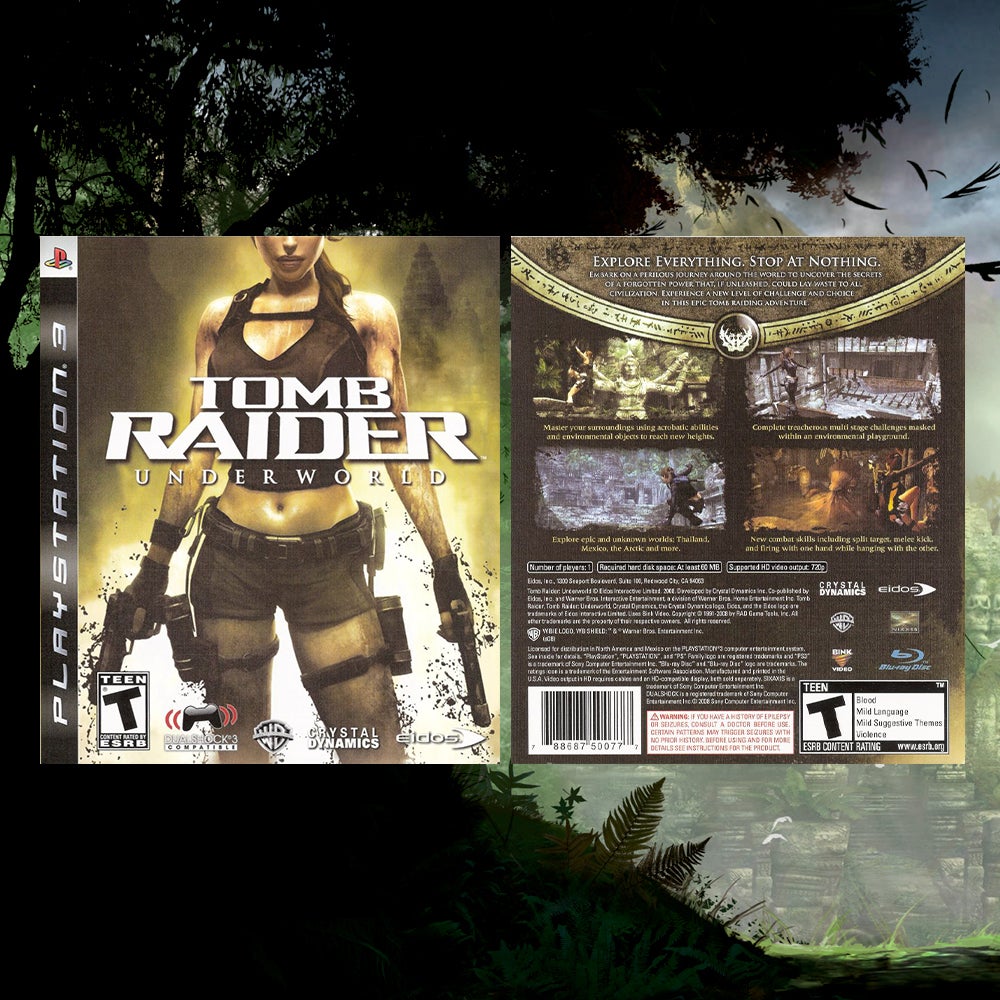 And the last one… Tomb   Raider: Underworld! In this third (and last) part of the blog, we can find different editions and talk about the climax of the trilogy and its arriving to PS3 for the first time.

Tomb Raider came to PlayStation 3 with this game, which also meant a change in the gameplay of the game, since it took advantage of the DualShock options with the Sixasis movement. Unlike in Tomb Raider: Legend, where only the face of Lara Croft is seen, here we can see the complete body of the adventurer without barely contemplating   her face. 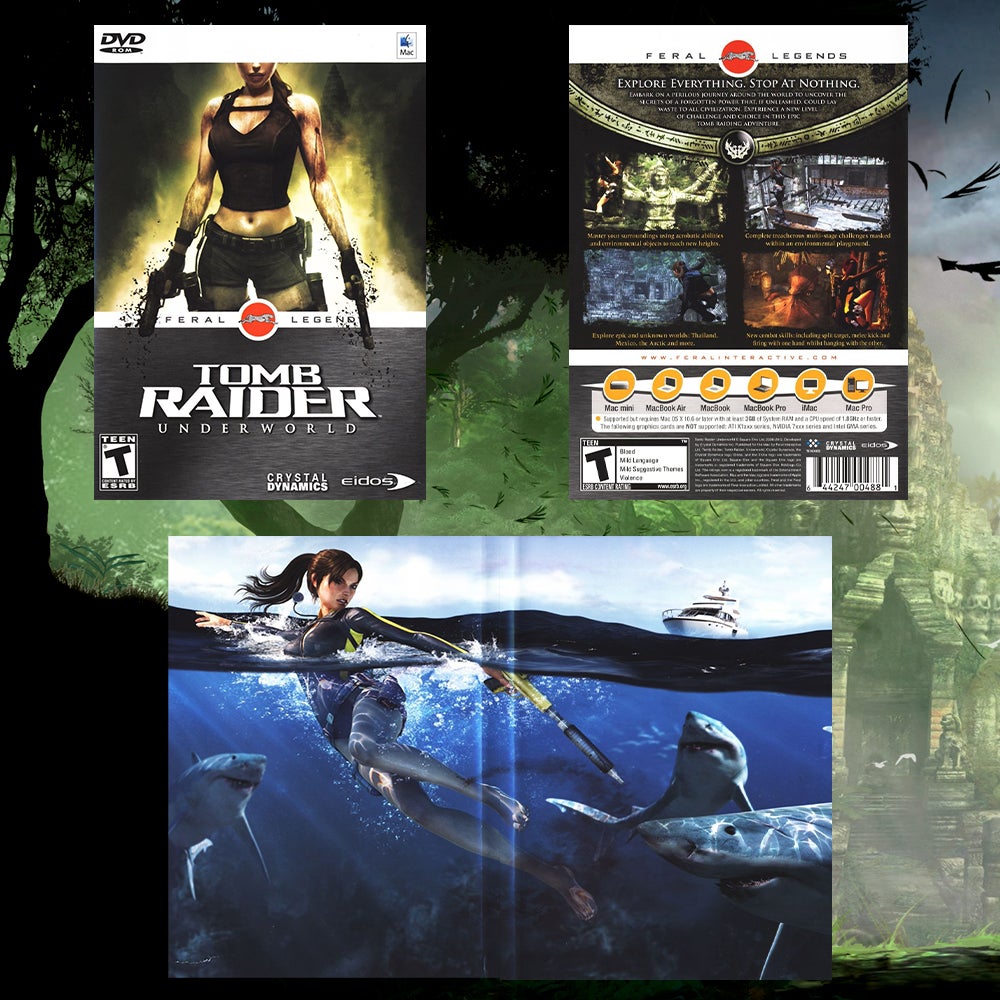 Tomb Raider: Underworld had an impressive edition for Macintosh with a great sleeve design and an interior featuring Lara Croft's keyart in the Mediterranean Sea.

These editions of Feral Interactive (in charge of porting the games to Mac), are the new special editions of PC that differ slightly from the standard ones, and they delight collectors for their style and limited units. 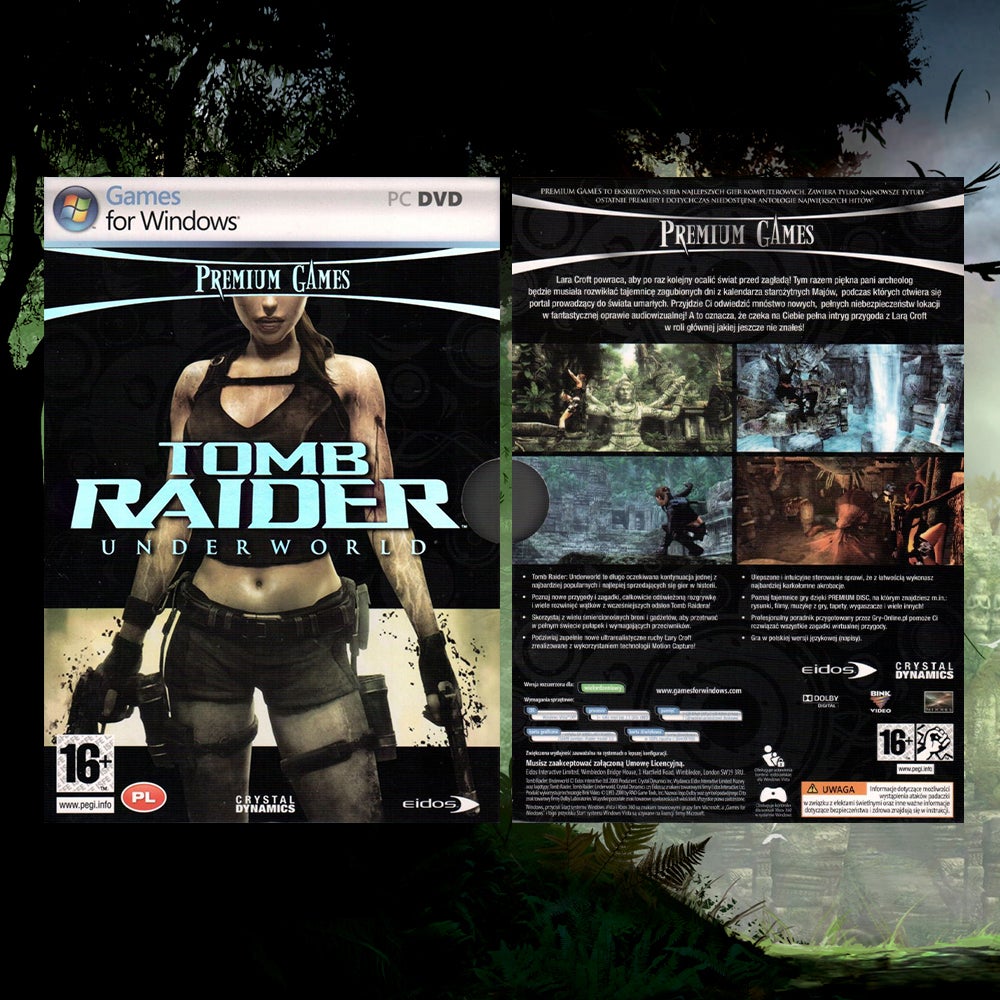 Regarding the deluxe editions for PC, Poland (known for publishing impressive versions of many games while maintaining its image but with very cool light touches.

This is the case of this edition of Tomb Raider: Underworld, with luminous reflections in a cardboard sleeve, it honors the label under which it is published: Premium Games. 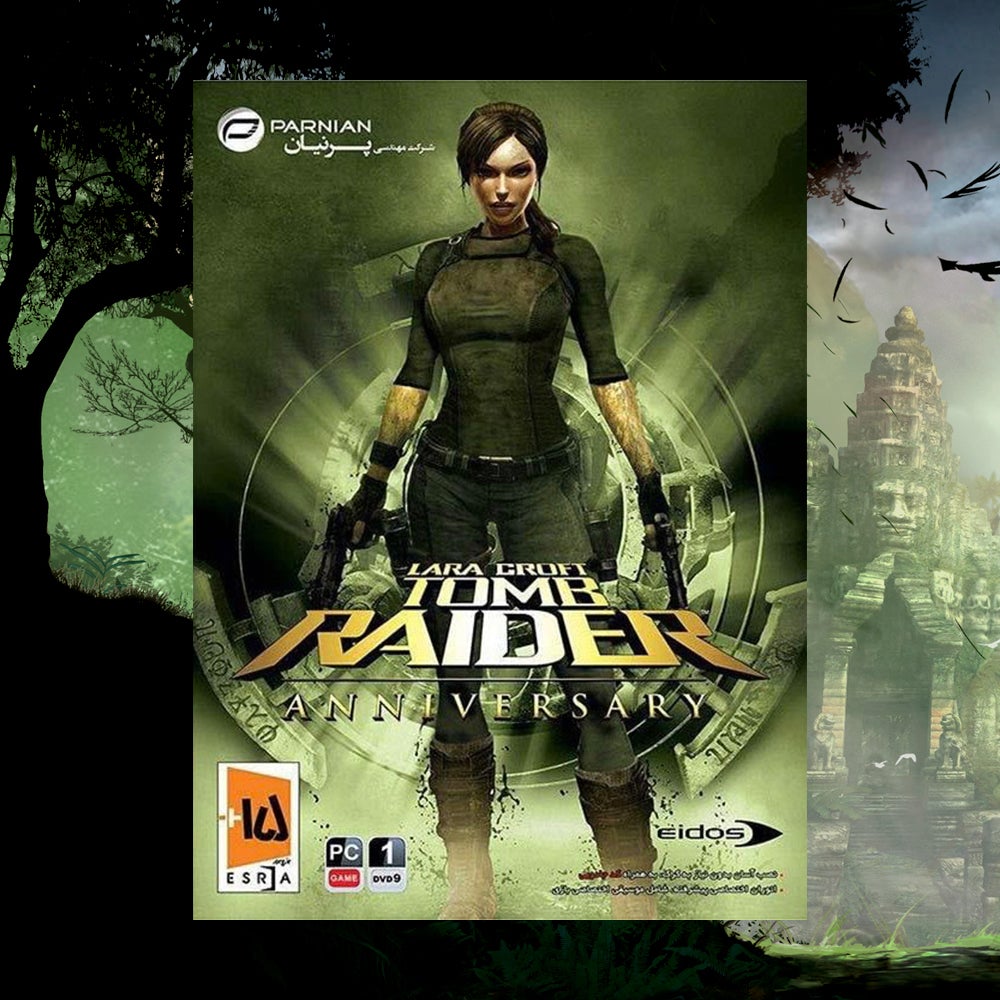 I wanted to introduce this cover as a detail about the difference in the keyart for Arabia. Lara's outfit changed in accordance with local values for the Arabic edition.

Beyond that, another curiosity is that although it is Tomb Raider: Anniversary, the complete design is that of Tomb Raider: Underworld, and that is why it is in this section. I came across this cover by chance and being the first time, I wanted to share it with all of you. 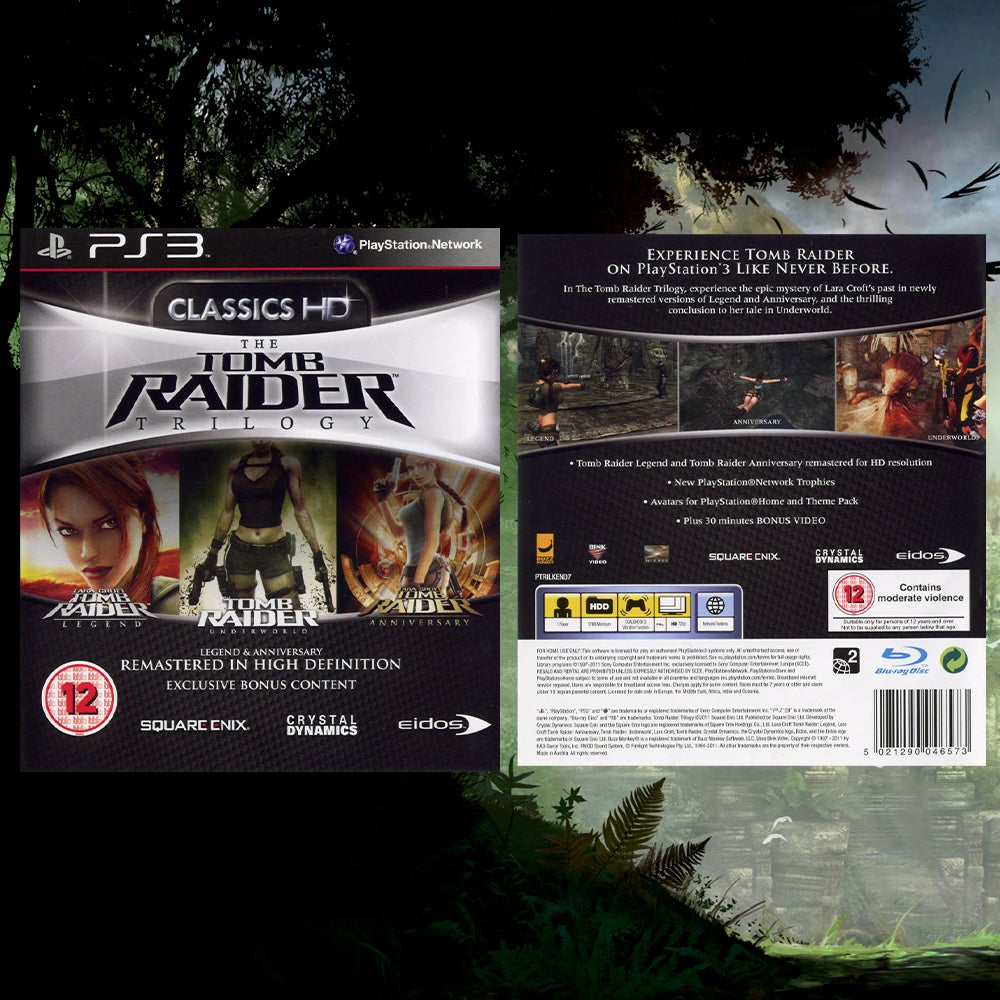 The Tomb Raider Trilogy was a delight to all Lara Croft fans and new players to the franchise. For the first time, the three games developed by Crystal Dynamics were available for PlayStation 3 (we remember that, initially, Legend and Anniversary were only released for PlayStation 2).

With a new trophy system for the first two games and a lot of extra content, this edition was a real boom for the Sony console and, more specifically, for the players who were able to enjoy this gem. 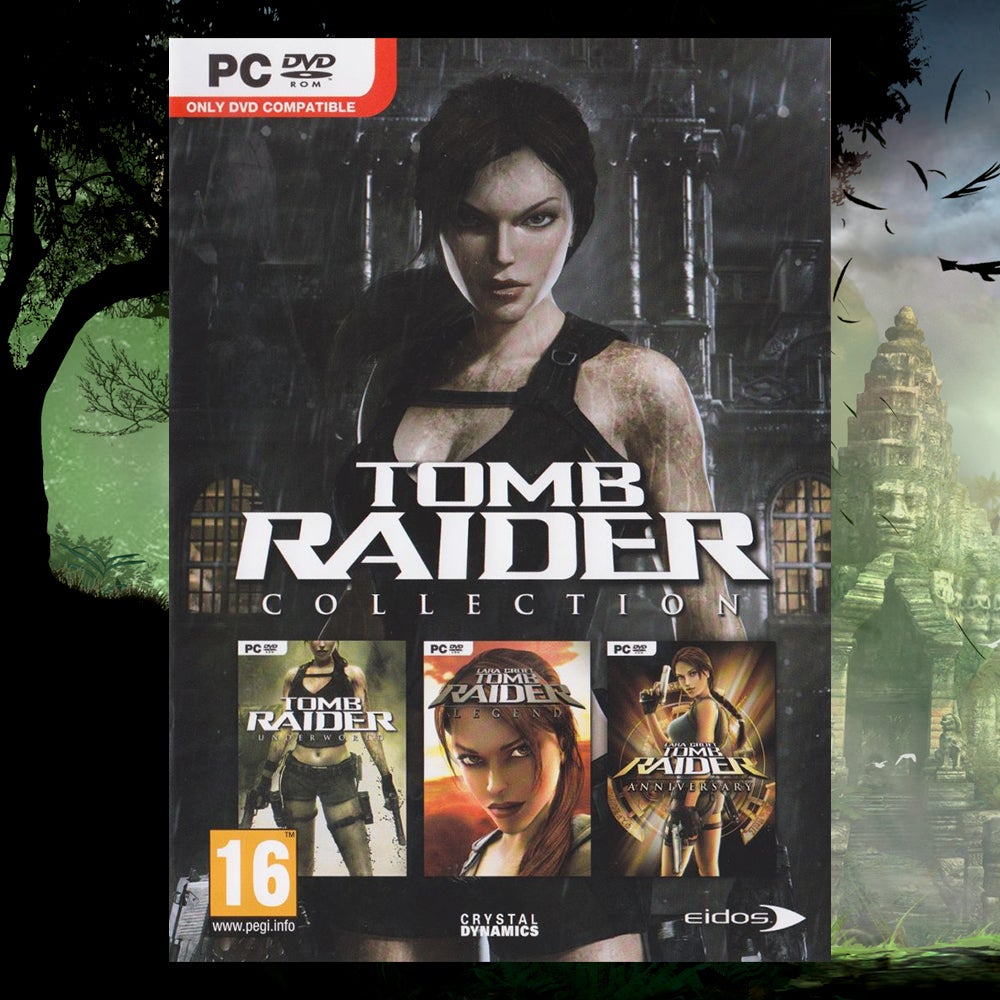 Finally, the Tomb Raider: Collection is a (collectors) edition with such a great cover art with Lara Croft in front of the Croft Manor where Doppelganger detonates the bomb; a very dark art.

This PC edition closed the LAU trilogy for PC. Also, we close an amazing era with this. At that time, a gap of 5 years between main games was going to happen. Another edition for Xbox 360 was also released.

Hope you enjoyed my personal selection for Tomb Raider: Legend, Tomb Raider: Anniversary & Tomb Raider: Underworld covers, but I aim you to discover more and new ones. I’m Alejandro Cambronero Albaladejo and you can follow my path on Alex’s Tomb Raider Blog or Tomb Raider World and my social media (Twitter, Instagram and Facebook). Stay tuned for next blog with Tomb Raider (2013). See you and keep exploring!