In this new installment of "Treasure Hunters" we enter the darkest stage of the Tomb Raider franchise to analyze the merchandising and the most exclusive memorabilia from the most controversial game to date. A stage of transition and evolution in the saga from which the always remembered "Lara Croft Tomb Raider The Angel of Darkness" (2003) was born.

Last month we were analyzing "Tomb Raider Chronicles" (2000) if you missed that entry, it's time for you to take a look at it to be able to follow our continuous journey through the history of the saga before going on to analyze the objects that we have today in hands.

"Lara Croft Tomb Raider The Angel of Darkness" (2003) was the game that had been in development for the longest time compared to all previous installments, they wanted to make a trilogy based on this story and a spin-off with Kurtis Trent, always starting from very ambitious ideas. Its development began in 2000 under the title "Tomb Raider The Next Generation" by Core Design and Eidos Interactive as it always had been. Both companies wanted to create something great in the new game, a risky and revolutionary proposal for the saga that would take advantage of the technical characteristics offered by the new platform on which the game was to land, PlayStation 2. This sixth installment would go down in history for the the high buzz that it had generated and the way it was finally presented, unfortunately obtaining a disastrous sales result (2.5 million units sold) and harsh criticism. The development of the video game had many problems when facing a new editor for the first time to adapt to PlayStation 2, leaving behind the block-based one that the team had already mastered since the first Tomb Raider, and having tight deadlines and having different ideas contradictory and varied without knowing if they could carry them out. The game was continually delayed and the pressure from Eidos was evident. Core Design managed to get a few months of extra time to polish the title by moving the date from November 2002 to June 20th, 2003. The team, instead of dedicating itself to polishing what they already had, applied new playable and script changes for not being satisfied with what there was, leaving as a final product a title with numerous flaws and that the critics did not forgive. It was the first time that the saga went through a pothole of this magnitude.

Due to poor results, in June 2003, Jeremy Heath-Smith, Adrian Smith, and forty Core Design workers left the company and formed Circle Studio where they worked to create a third-person shooter for PS2 and Xbox called Without Warning (2005). Its reception was not too positive which caused the subsequent decline of the studio and made them close permanently in February 2007. Core Design had been sold to Rebellion Developments in 2006 who would rename the company with the name of Rebellion Derby and remain in Eidos / Sci holds its intellectual property. Finally in 2010 the studio closed its doors definitively after years of work and multiple games.

Following the failure of The Angel of Darkness, Eidos took full control of the successful Tomb Raider saga and decided that they must leave it to a new studio if they were to keep Lara Croft's legacy alive. Ian Livingstone (president of Eidos) stressed in various interviews conducted in 2003 that it was not an easy decision to make. Ian himself said in Eurogamer (Yin-Poole, 2016) about Core Design:

“They were great developing on PS1 but they didn't quite make it on PS2. Meanwhile we knew that Crystal Dynamics had an amazing physics engine that they had used for “Legacy of Kain” and could easily create a puzzle game that would be the next Tomb Raider and they did it like that"

The merchandising and the image of a dark and mysterious Lara spread even more throughout the world. There were advertising collaborations such as with VISA, where the Colombian actress and model Sofía Vergara played Lara Croft for the advertising campaign entitled "Monster Chase" devised by the advertising agency McCann Erickson (now McCann Worldgroup).

With enormous fame and such a globally recognizable figure, it was time to enlist the help of a talent agency to manage and represent Lady Croft. "Creative Artist Agency" were in charge of the task. This move was understandable due to the large amount of money that the character had moved since its inception: 700 million dollars in global sales, not forgetting the film starring Angelina Jolie in 2001 that raised another 275 million dollars, and of which Its sequel "Lara Croft Tomb Raider: The Cradle of Life" (2003) was already filmed. Regarding merchandising and commercial products, the figures already exceeded 1,000 million since its debut in 1996.

Despite all the negative reviews received, a part of the fans of the saga remember the delivery fondly due to its complex plot, its soundtrack performed by the London Symphony Orchestra, the aesthetics of the title and because it is the last game of the saga developed by the mythical company from Derby, Core Design. From then on, Crystal Dynamics would work on the next installment of the saga looking for a change of course and providing a fresh approach after being stagnant.

Here are some curious objects from this dark time. 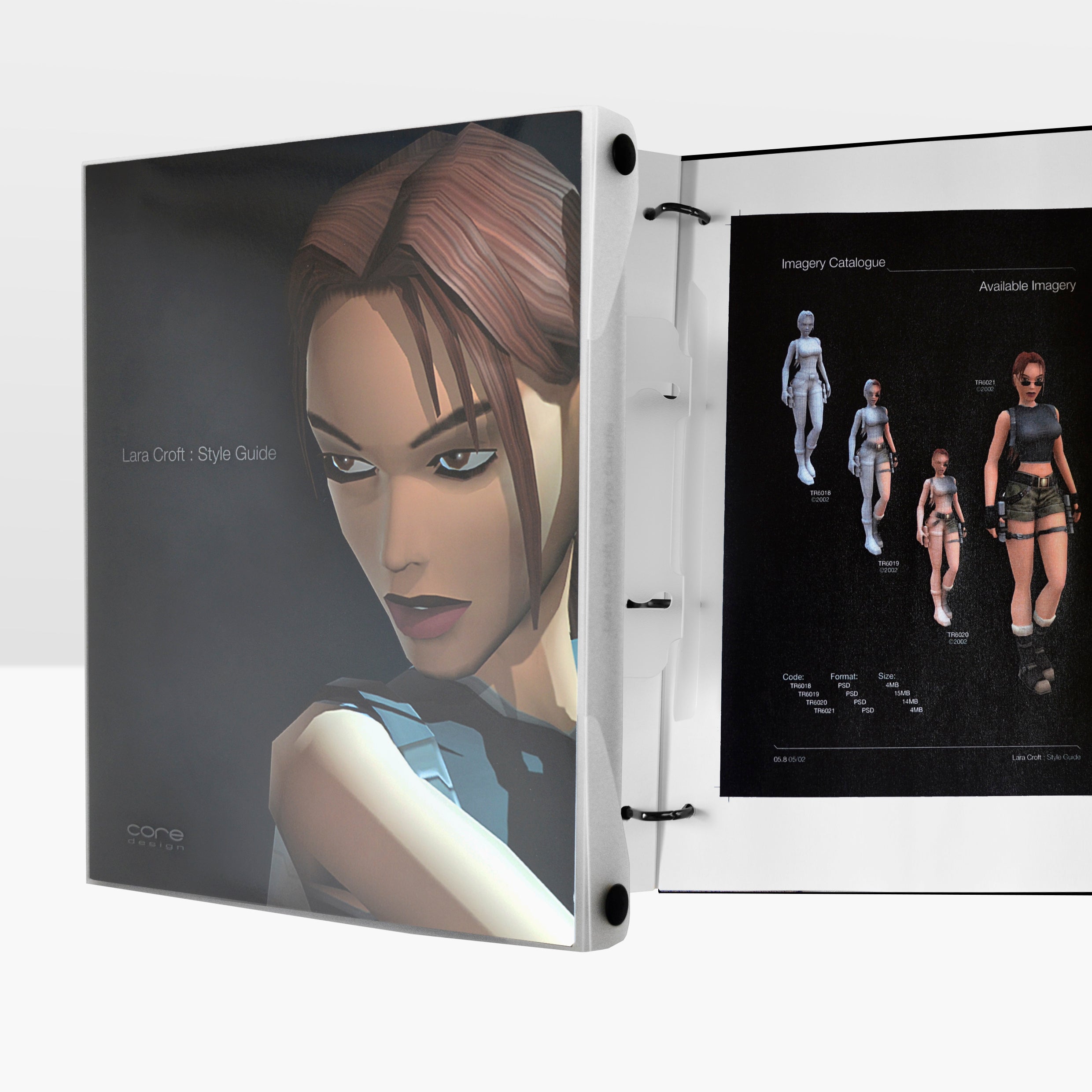 “Lara Croft Tomb Raider The Angel of Darkness” physical style guide. As it had already happened with the style guide that collected the TR 1-5 games, this time this guide is dedicated exclusively to The Angel of Darkness. It contains the aesthetics of the designs, logos, character design, Pantone, costume design, weapons... etc. There is also a digital version on CD with the same content and the original design files.

It is presented in a filing cabinet with a protective plastic sleeve that also closes with two buttons resulting in a very attractive design. 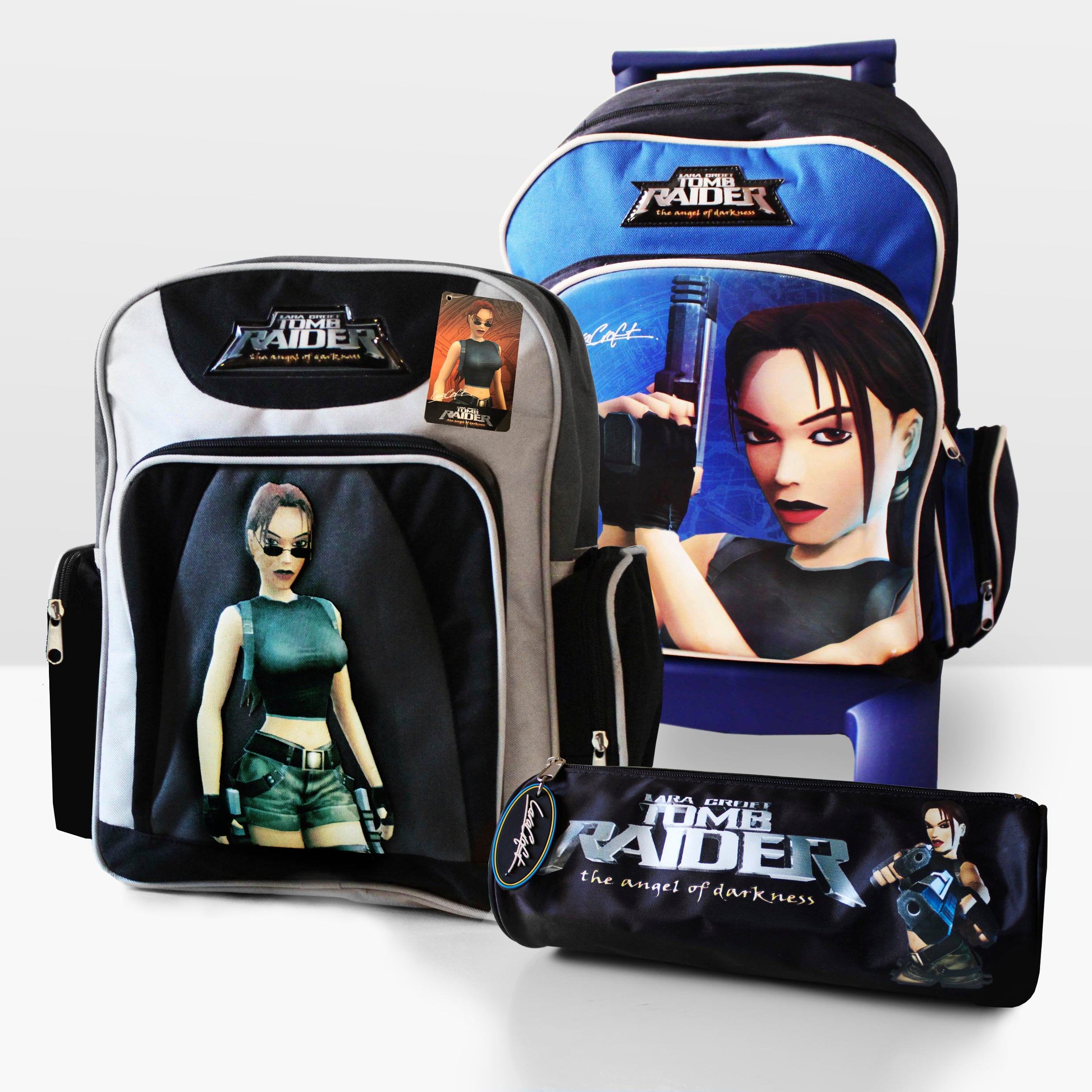 The Wellseason SL brand, specialized in school supplies, collaborated with Eidos to capture the face of Lara Croft in various products for school-age children. At the beginning of the 2003 academic year (which coincides with the month of September when the game was already on sale), children could find different Lara Croft products such as: backpacks, backpacks with wheels, pencil cases, notebooks, colored cases…,etc all with the aesthetics of The Angel of Darkness. For its part, another brand, Carlesse, also designed cases based on the aesthetics of the game and focused on a similar audience. 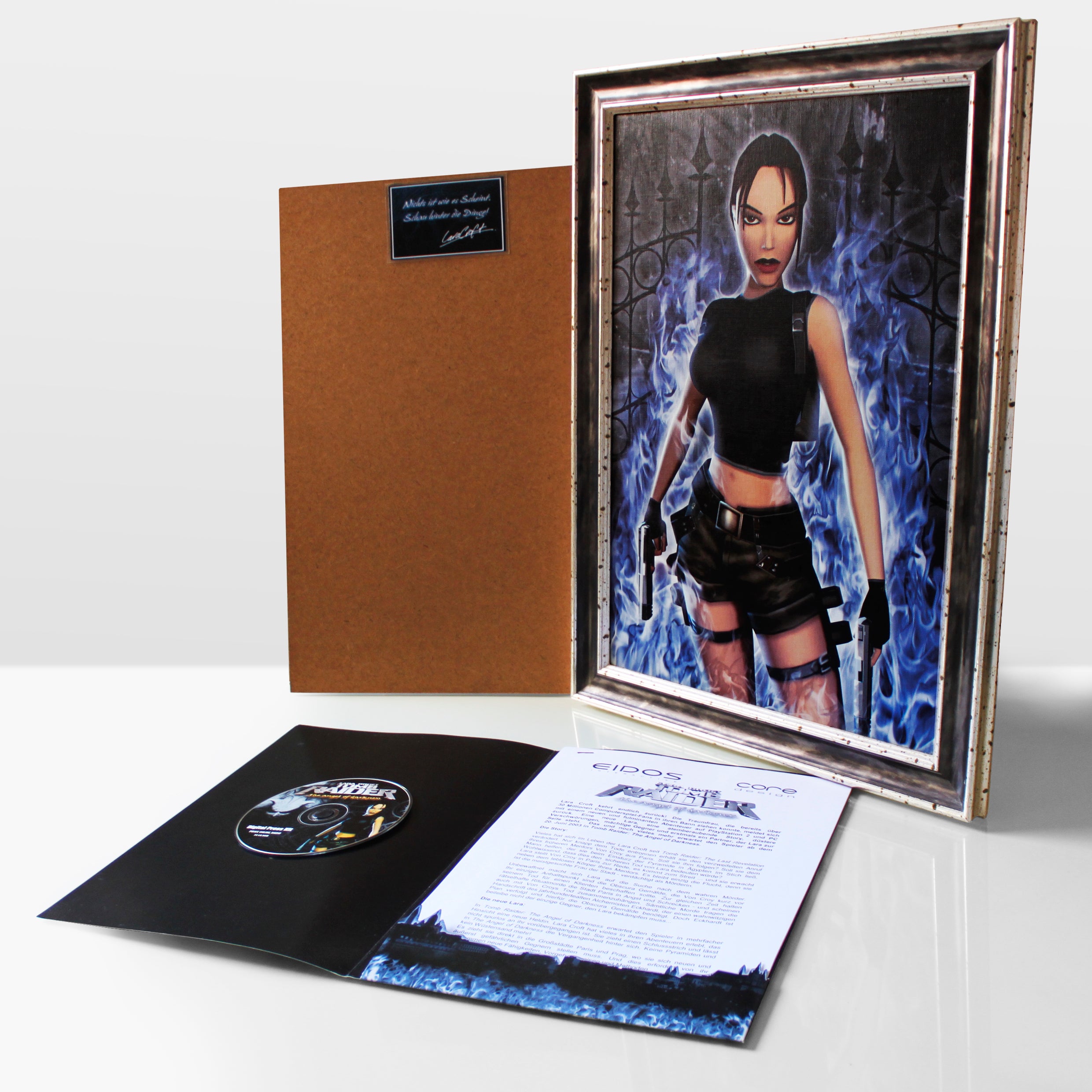 Tomb Raider The Angel of Darkness German Press Kit. This is one of those collectibles that stand out for their originality. Personally I find it a very attractive and visually very powerful idea. It is a painting by Lara Croft with the cover of the game "The Angel of Darkness" where it also refers to the "Obscura Paintings" of the game's own history. Behind the frame of the painting there is a message hidden where it says “Nichts ist wie es Scheint. Schau hinter die Dinge” ["Nothing is what it seems. Look behind things! "]. If you remove the back cover of the painting you will find hidden a folder with the press documentation and the CD with the graphic materials of the game. Just great. 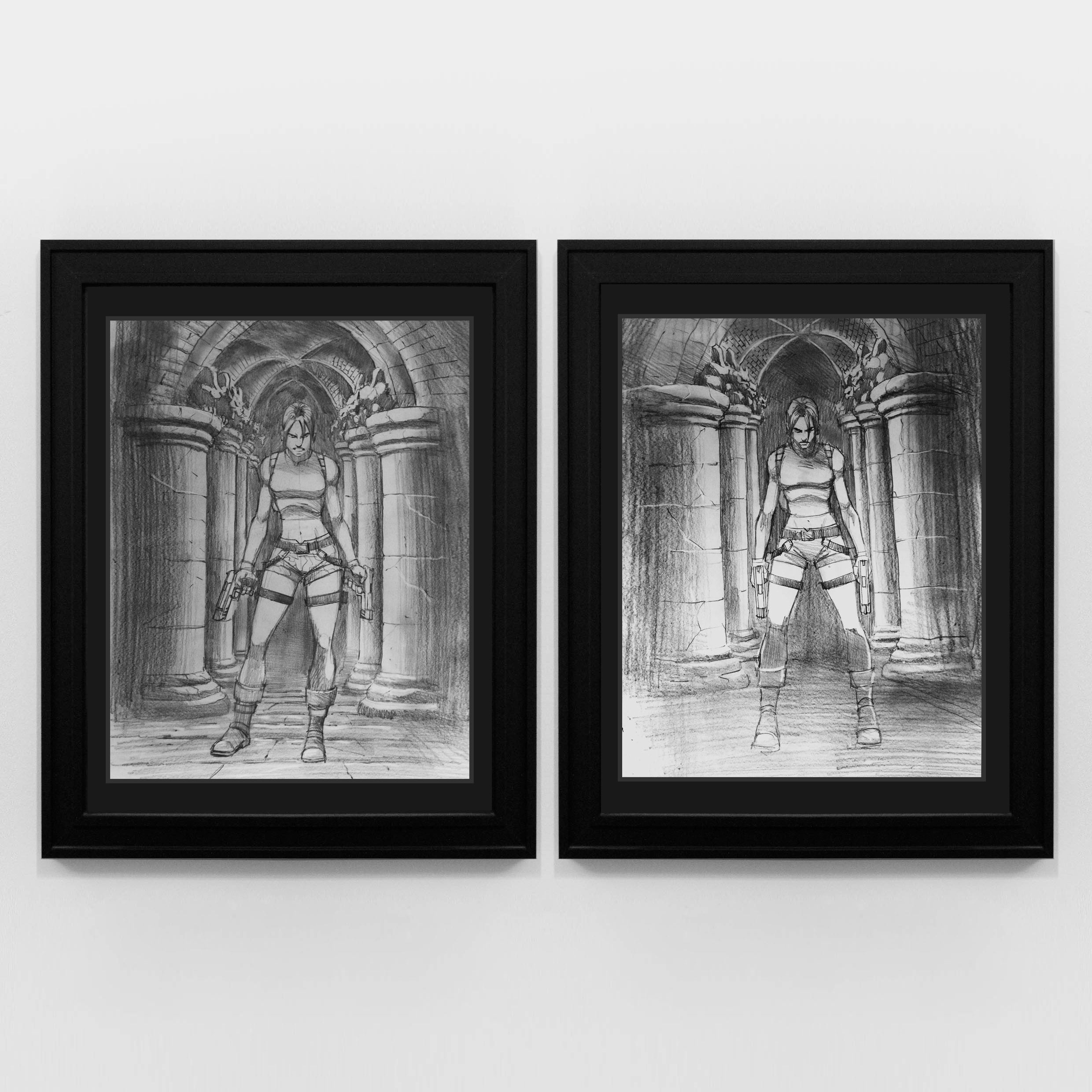 Original artwork from Lara Croft Tomb Raider The Angel of Darkness by the artist Steve Beaumont hired by Eidos Interactive to carry out the promotional artwork for the game. In these original concept arts we can see a dark and defiant Lara Croft in different poses and situated in a corridor of Roman-style columns with numerous gargoyles on top. The artist Steve Beaumont was also in charge of the original design of the cover of this mythical game, just as he had already done with The Last Revelation. 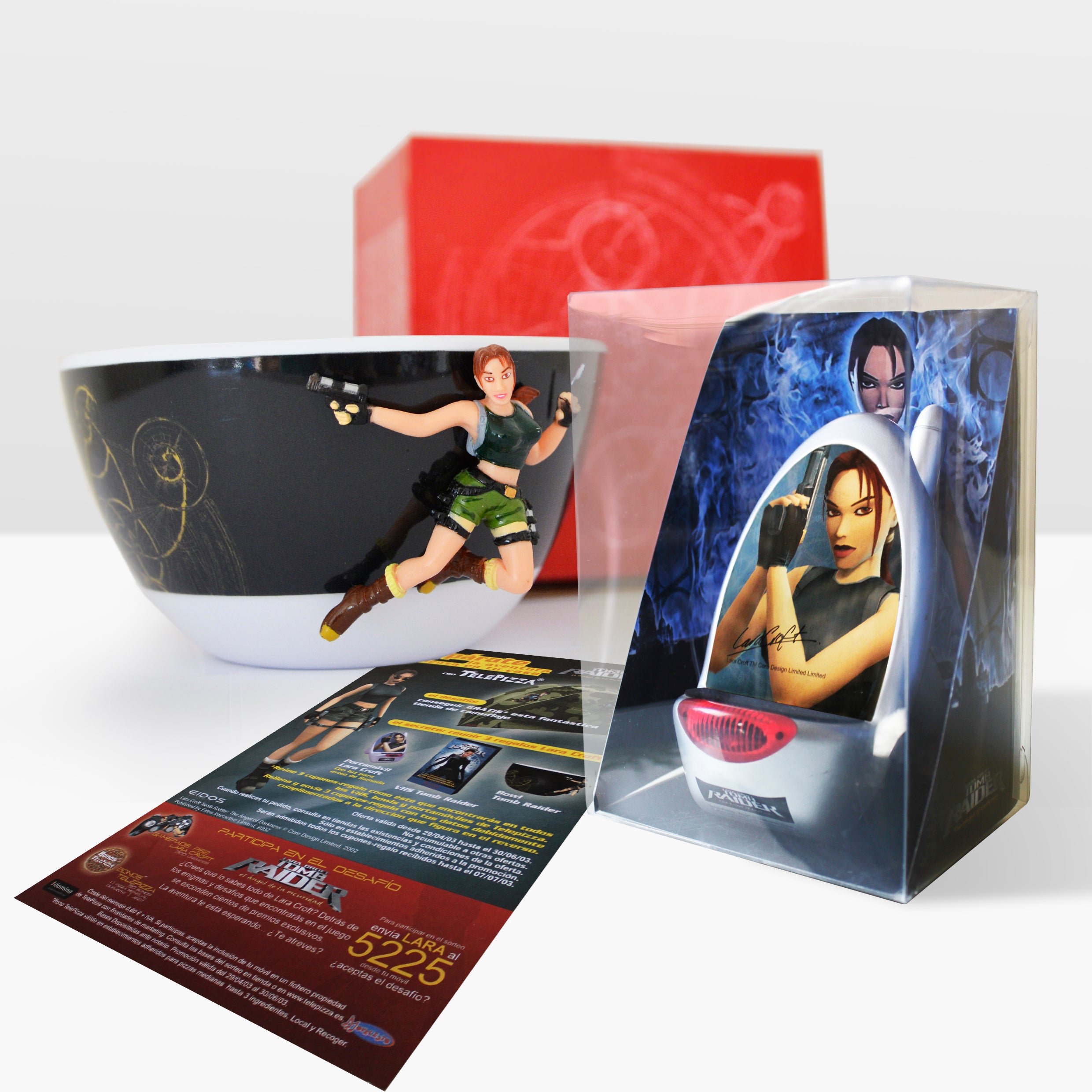 The leading Spanish pizzeria brand, Telepizza reached a commercial   agreement with Eidos Interactive in the summer of 2003 to promote the new   game, Tomb Raider The Angel of Darkness and when ordering a pizza they gave away promotional objects such as: a bowl for breakfast, cell phone stands   with light and the VHS of the film "Lara Croft Tomb Raider" starring Angelina Jolie. 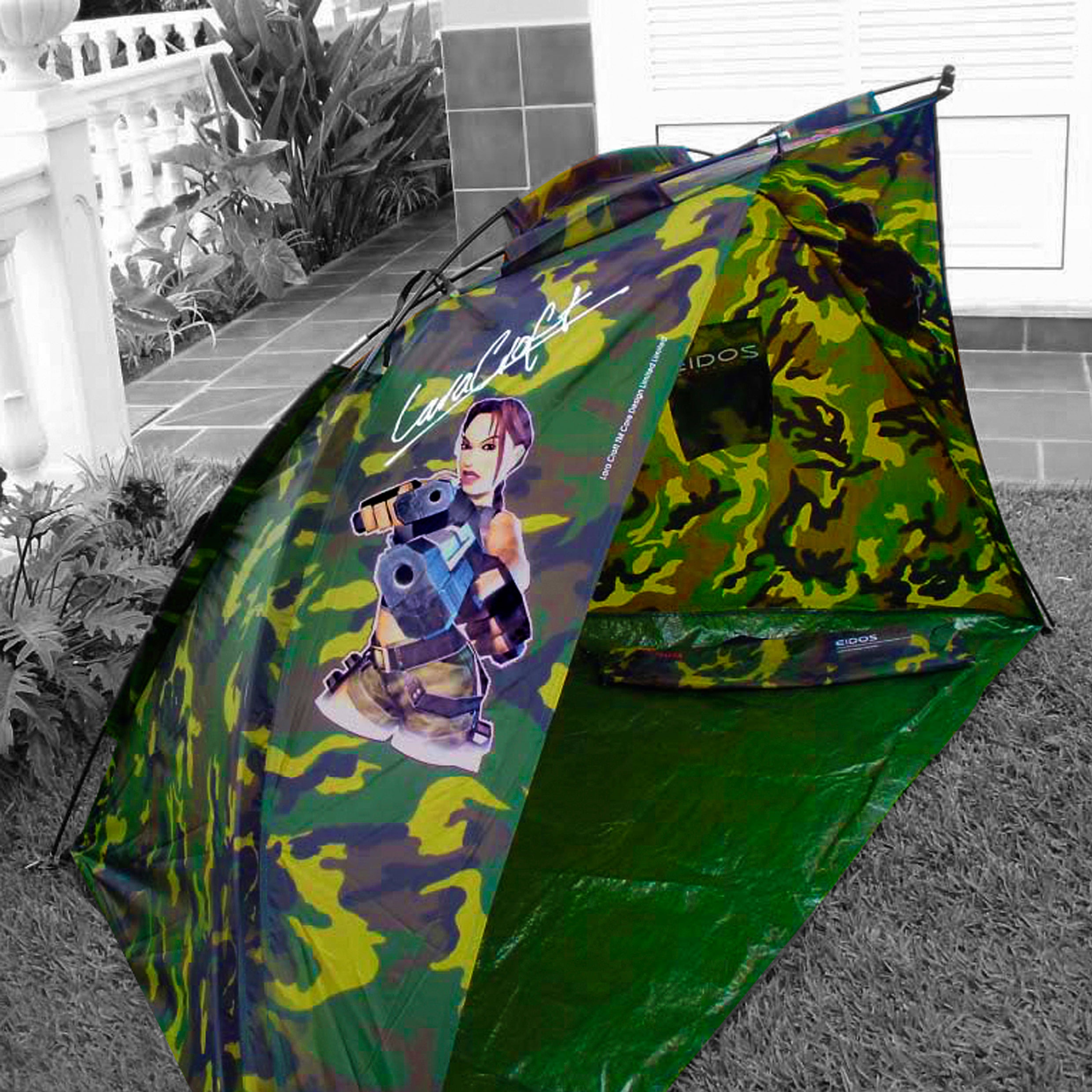 Also, if you managed to get these three main prizes, you would get as a gift the top prize, which was Lara Croft's camping tent. In addition, during this promotion you were entered in the draw for Tomb Raider The Angel of Darkness games for PlayStation 2. 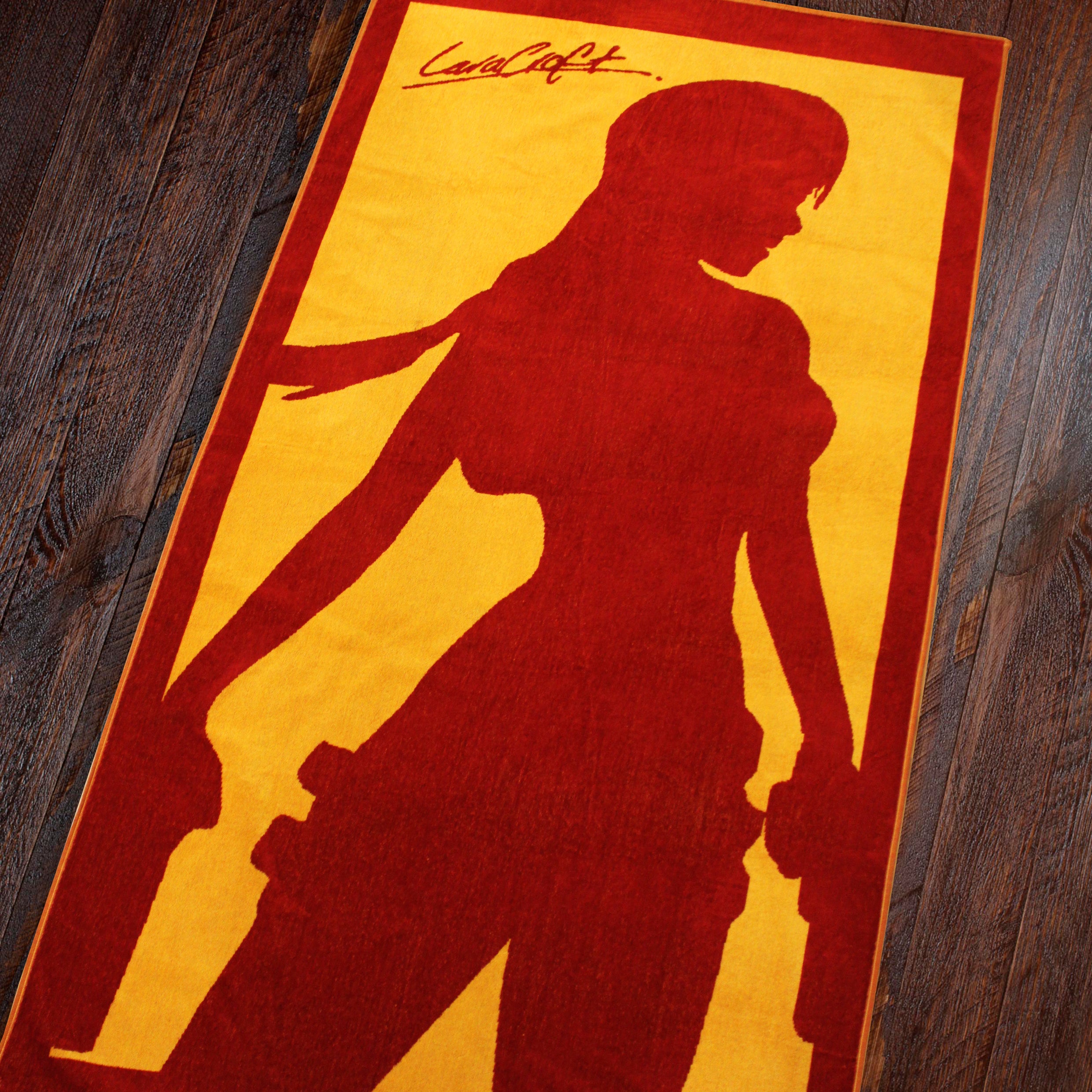 The French clothing brand Inno-Wear and together with the company Himmersion carried out a collaboration with Eidos for the creation and distribution of different textile products on the occasion of the tenth anniversary of the franchise. Although these products were created in 2007 (with the Tomb Raider Anniversary promotion), I have decided to include them in this list due to the use of Lara Croft's silhouette in AOD. The product catalog included Lara Croft's silhouette towel and a collection of men's and women's t-shirts that were sold in attractive metal box packaging also with Lara's silhouette. 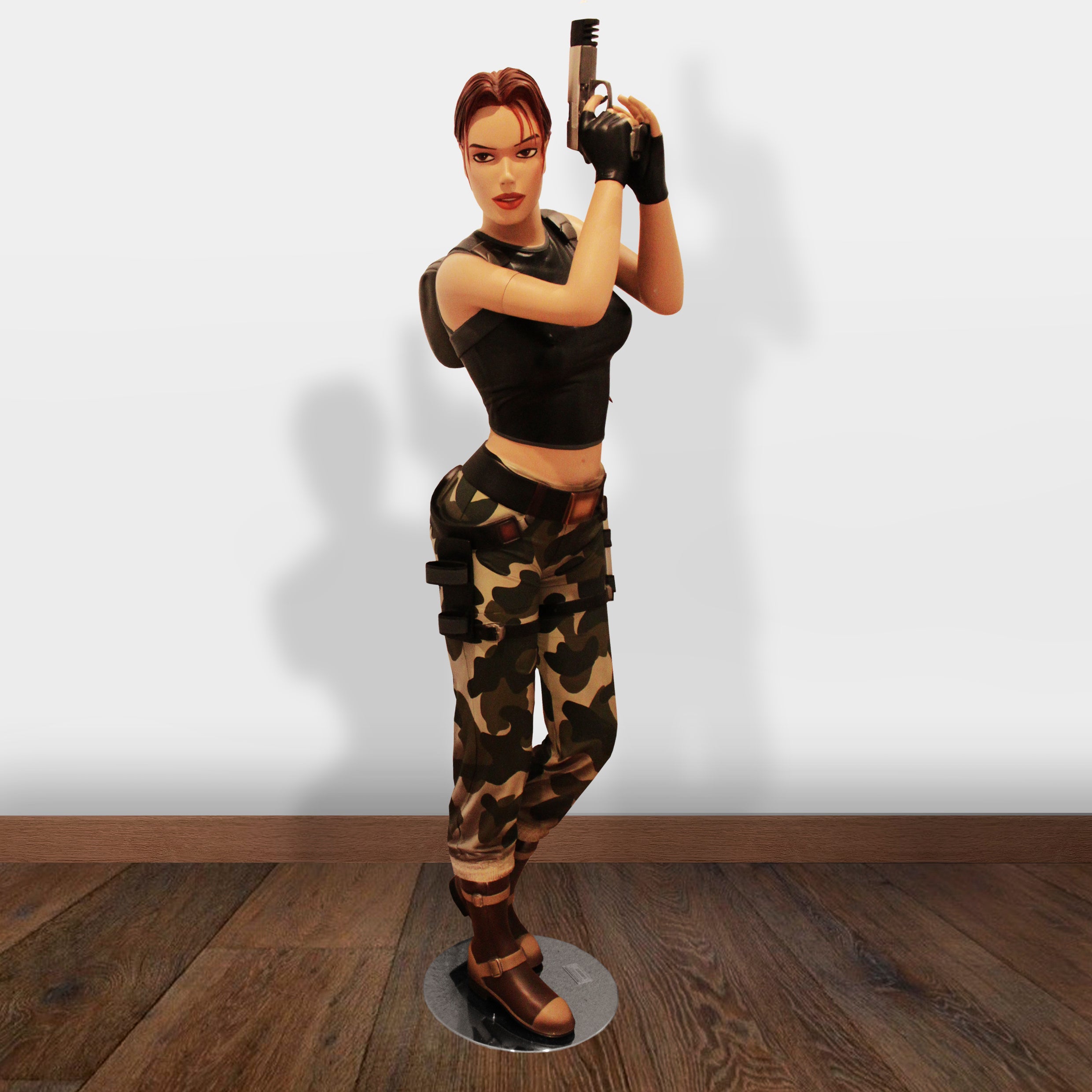 As usual, Eidos Interactive Germany reached an agreement with Studio Oxmox (and distributed by Muckle Mannequins) for the realization of the corresponding   life-size statue of Lara Croft that was distributed by specialized stores for the promotion and sale of the new game. This time it is a 175 cm tall statue   sculpted by Marc Klinnert and based on Lara Croft in The Angel of Darkness.   As with the previous statue based on Tomb Raider The Last Revelation, this   statue has two alternative bases, the normal edition (with a simple metal   base) and an exclusive edition of only 30 units with a pedestal in the shape of a circular staircase that raises the statue up to an extra 30 centimeters. Unfortunately I do not have this special base in my collection to be able to   show it in the photos that accompany this article.

I am Rodrigo Martín Santos and I hope you liked this brief tour of the time of "Tomb Raider The Angel of Darkness", I personally remember this game with great affection because during that time my hype for the franchise did not stop growing, I remember being super excited on the day of the game's commercial release and certainly enjoyed it a lot, on the same level as the foreplay though I hated that the double guns couldn't be used. If you are interested in collecting items about the franchise, I encourage you to follow me on my website or through Facebook. Next month we have a new appointment for this section to welcome the first contribution that Crystal Dynamics made in the franchise by giving us the legendary “Tomb Raider Legend” and one of my favorite games. See you next month!