We continue to advance in this trajectory on the most coveted merchandise by Lara Croft fans, the rarest and in many cases the most expensive and difficult to obtain. Last month we analyzed in depth the game and the objects related to “Tomb Raider IV The Last Revelation (1999)” you can take a look if you did not have the opportunity to read it before. This month we are going to dedicate our time to the next video game in the franchise, of course, I am talking about "Tomb Raider: Chronicles (2000)"

We are in the year 2000, specifically in Los Angeles during the annual E3 event where the new game in the franchise is announced that will be titled "Tomb Raider Chronicles" and that continues the tradition of releasing a new game every year. During this event, there is also a surprise, Core Design not only announces "Tomb Raider Chronicles", it also makes known to the specialized media that it is already working on the next video game and that it will be for PlayStation 2, at that time the game will be would called "Tomb Raider: The Next Generation" and a year later would be renamed "Lara Croft Tomb Raider The Angel of Darkness" (2003). The announcement of both games caused Tomb Raider Chronicles to go a bit more unnoticed as everyone turned out to be more excited by the change of generation and the graphics of the next PlayStation system than in the game that was approaching users that same year.

Chronicles functioned as a passage between The Last Revelation and what was supposed to be the revolutionary title for the saga (AOD). "Chronicles" story was told as short stories of Lara Croft's past adventures waiting to be revealed if Lara had managed to survive the collapse of the pyramid in her previous adventure.

Core Design had begun development of "Chronicles" as soon as "The Last Revelation" was released. When the whole team was immersed in the development of Chronicles there was a change of office for the entire Core Design team in Derby. The profits produced by Lara Croft and the sale of her video games made the company able to afford a larger office that could accommodate not only a team of workers but 7 different teams working simultaneously, therefore, in March 2000, the team left the Victorian home where they had worked and created Lara Croft (located at 55 Ashbourne Road, Derby, UK) for a new headquarters in Pride Park (Derby, UK). In an interview with Gavin Rummery, he went on to say that he felt that something had died with the move and that the feeling and originality of the team to create new adventures for Lara Croft had been lost and remained in the old office.

Finally, on November 20th, 2000, Tomb Raider: Chronicles went on sale with a total of 13 new levels in different locations and being one of the shortest games in the history of the license. Due to the combined presentation and by varying the linearity of a single story for four smaller stories, Chronicles did not convince much of the critics and the fans only had an average rating of 63 on Metacritic. The magic formula of the franchise was running out and that was reflected in its sales with only 1.5 million copies sold.

While, in the rest of the world, Lara Croft continued to increase her fame, the production of the first film starring Angelina Jolie had begun, which would cause a large part of the public that was not fond of video games to know the character. A wave of back-to-back merchandise from previous games coupled with everyone who appeared for the first movie made Lara Croft present at virtually any specialty store. Her fame had reached its peak. Lara was too big to be handled by a small Derby team, the weight of success was beginning to show, it was time to take a step forward in this regard and to know how to properly manage the "Hand of Midas" that the company had. Werner Von Croy finally managed to find Lara deep in the pyramid "We´ve found her!" (he was quoting at the end of the Tomb Raider Chronicles video game), but had Eidos Interactive really found Lara Croft or were they on their way to losing her forever?

We will analyze the merchandise based on Chronicles below. 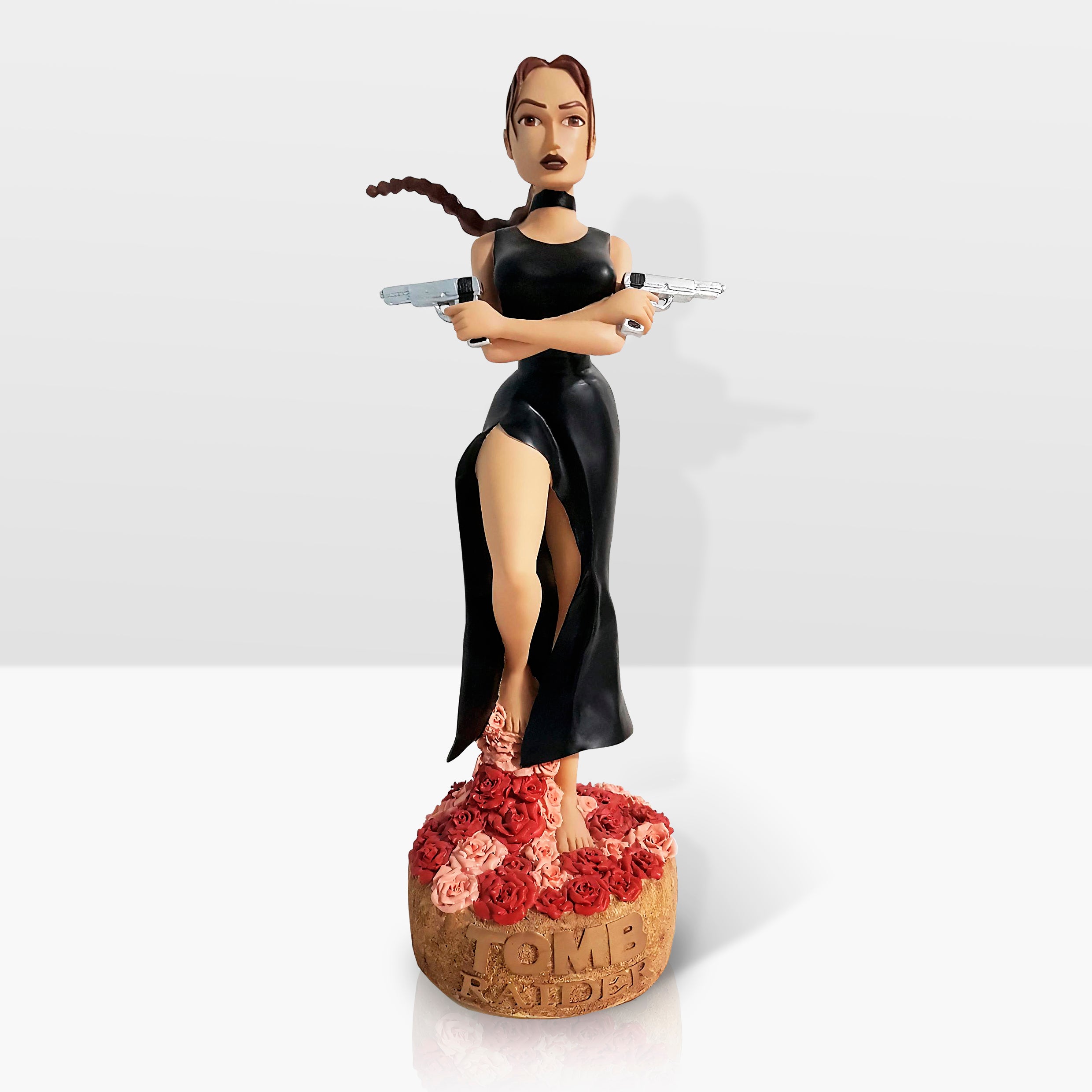 Lara Croft on roses statue is probably the jewel in the crown of all collectors. Undoubtedly one of the most desired and difficult to find statues with prices that never go below 1000 euros for a copy. This statue was designed by Muckle Mannequins in Australia in 1999 who are also responsible for all the life-size statues of Lara Croft and which we already talked about in the article about Tomb Raider The Last Revelation last month.

The exact number of units that exist of this statue is unknown as they are not numbered, although it is estimated that less than 50 units. The statue measures approximately 12 inches (30 cm) and originally comes in a white box. 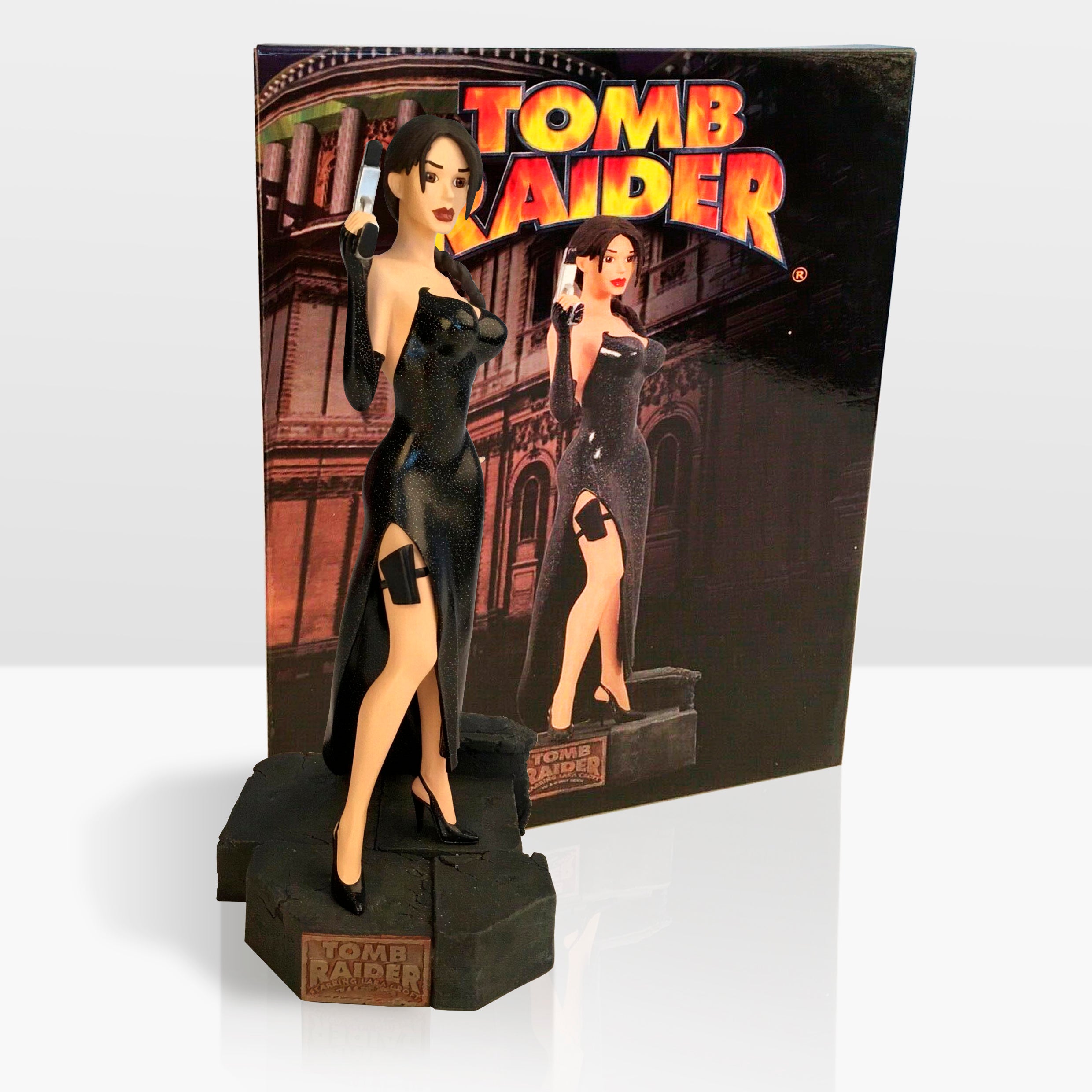 Statue "Lara Croft Black Evening Dress" (3500 units) that together with the mini-bust (4500 units) and the statue of Lara Croft on Mayan ruins (4500 units) make up the collection of three statues made by Steve Varner and his team of Varner Studios in 2002.

This is one of the most beautiful classic Lara Croft-inspired statues ever created, in a glitter-covered evening gown made of resin she quickly became a fan favorite. In the statue's box, in addition, Lara recounts her adventures in the form of a diary with notes as curious as this:

I received a cellular call today from Varner Studios as I was tramping through the mountains back from the lost Temple. The studio had completed a sculpture of me based on vid captures I sent from the Rambaldi security tapes.

The connection started breaking up when a bullet whizzed past my car and chipped my phone antennae. I told them I would get back to them and to e-mail me the particulars.

The e-mail I just received includes a few photos of the figure...brilliant! It looks just like me, but dressed a bit fancier than usual.

This is the second full length figure they've done of me, along with a bust. They say it's a limited edition of 3500. I must finish my mission quickly, return to Surrey, and order a few before they're all snatched up! 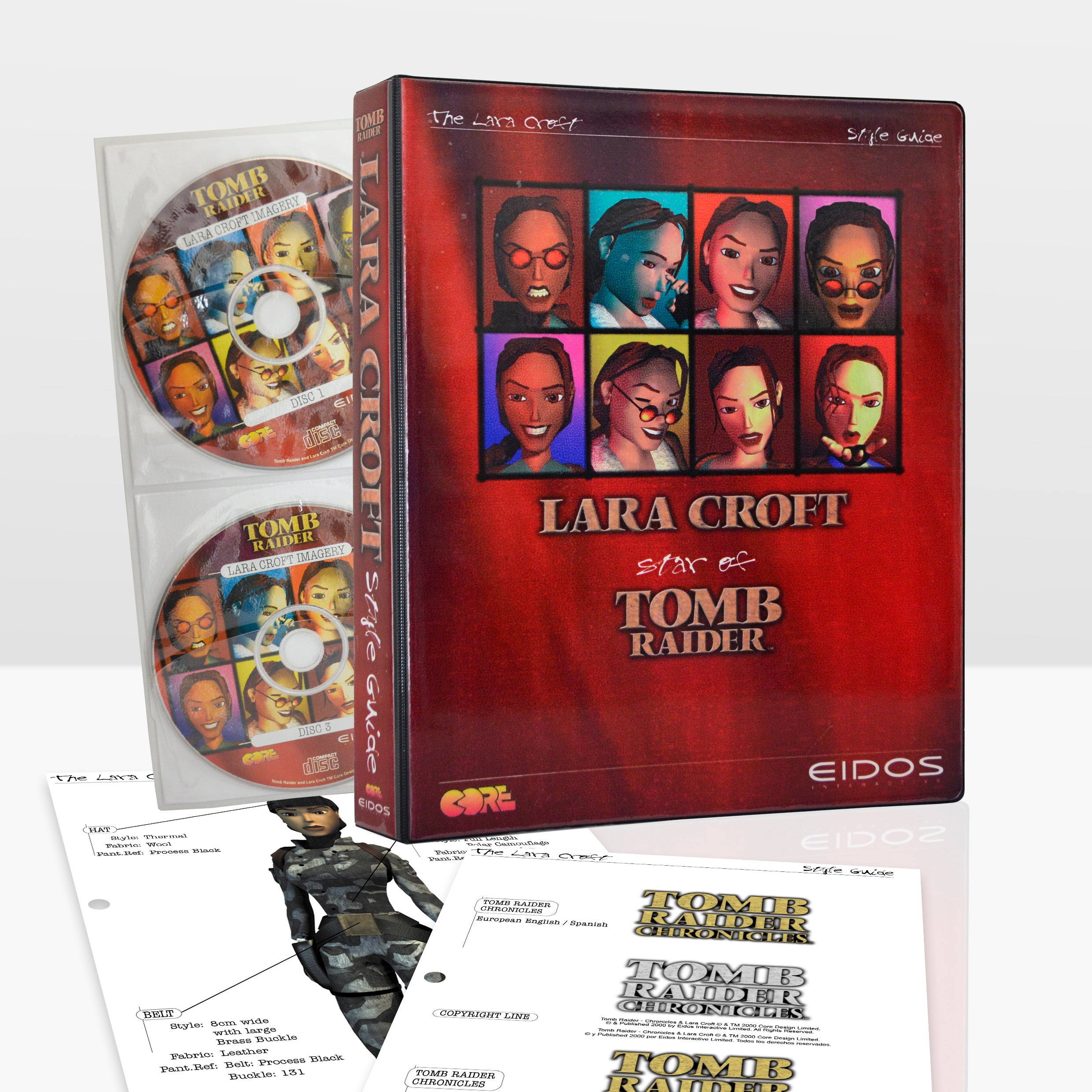 Tomb Raider style guide with the details and aesthetics of the designs, logos, pantone, costume design, weapons,... etc of the video games between TR 1-5. They include different CDs with the original files of the company's promotional images.

Original Niels Berndsen t-shirt on his feat of cycling the route between the Netherlands and Derby (England). We can see the t-shirt sponsored by the Eidos Interactive and Core Design brands in the photos that accompany these lines.

On September 2nd, 2000, Niels (a fan of the franchise) began his cycling tour in Veenendaal, the Netherlands, on his way to Core Design's headquarters in Derby, England. Where he arrived on September 5th around 4 in the afternoon.

Core Design was indeed very supportive of Niels' initiative since the beginning, they've sponsored it, they got Lucozade to sponsor it, they have found Niels places to camp at night, etc.

This event was used by Eidos Interactive as part of the Tomb Raider Chronicles marketing campaign, promoting sports and healthy lifestyles thanks to video games. 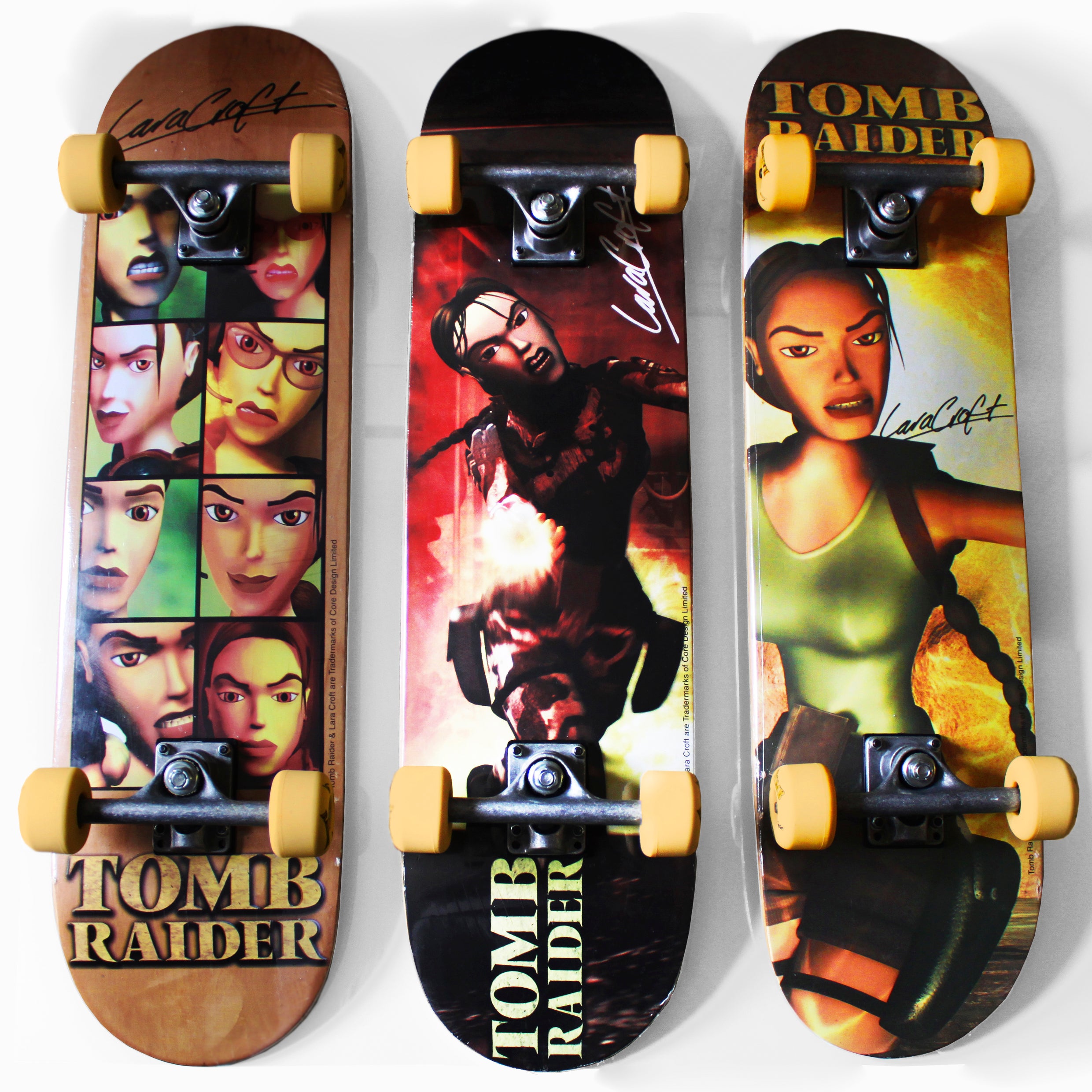 Eidos Interactive paid special interest at this stage in promoting sports merchandising, especially to retain its majority audience, which in this period was mainly teenagers.

In collaboration with the Holy / Templar SA brand, they released a series of skateboards with different designs from the last stage of Lara Croft (mainly based on Chronicles and The Last Revelation) with attractive full-color designs on the bottom of the table and wheels personalized with Lara Croft's signature.

In recent years the value of these skates has skyrocketed at auctions, making them a very attractive item to collect.

To accompany these skates, it also offered protection material such as knee pads, wrist guards and elbow protectors that we will analyze below. 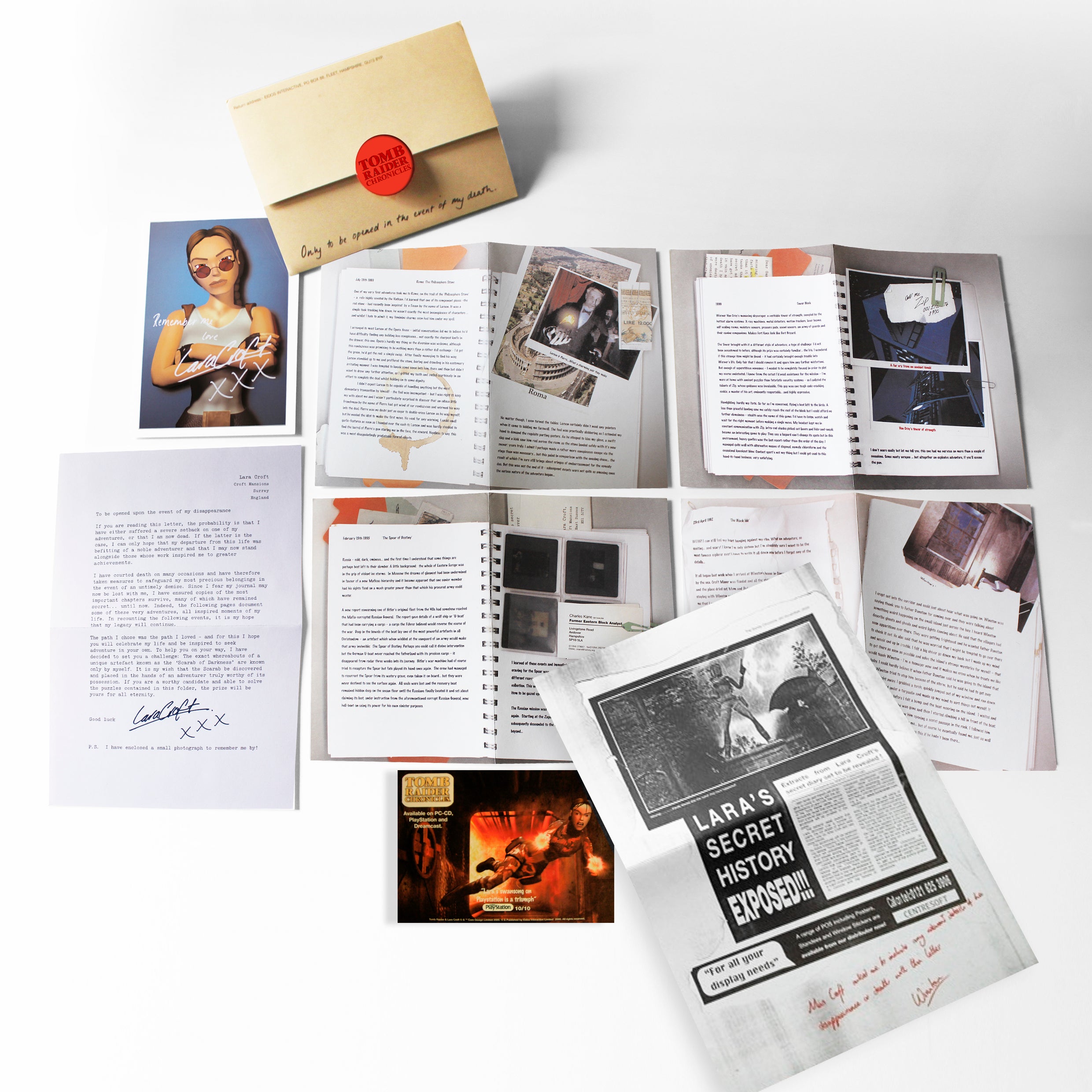 Original Tomb Raider Chronicles Press Kit (only 150 press kits were created). As had already happened with the press kit of The Last Revelation (we talked about it last month), this time Lara sends this letter to different members of the press, store managers and big fans to summon them on the occasion of their sudden death and to discover a secret hidden in his diary and as a contest to win the "Scarab of Darkness" prize if you manage to discover the solution to all the clues. It's takes form of an envelope prepared by Lara should she ever come to harm- upon it is written "Only to be opened in the event of my death". It   contains extracts from her diary, providing information on each episode that   appears in Tomb Raider Chronicles. It also contains a letter & photo from   Lara and an extract from "The Surrey Chronicle".

On the other hand, Eidos informs that in this way the marketing campaign begins and that it will extend until the sale of the new video game with advertising campaigns that include a new website or even advertising in theaters with the passes for the film “Charlie's Angels” - The film starred in 2000 by Cameron Diaz, Drew Barrymore and Lucy Liu. (I guess they would think it was within the tastes of their target). 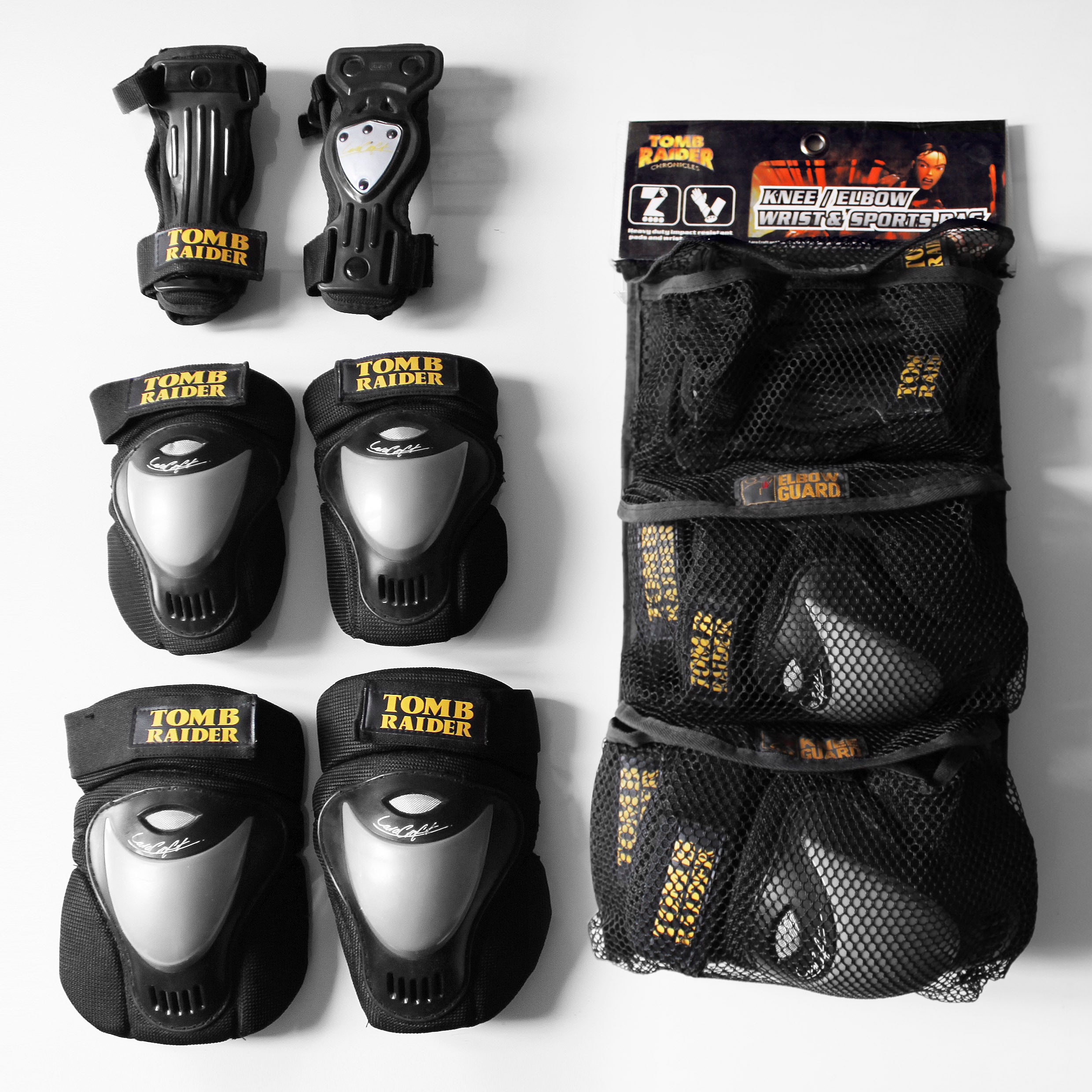 The English brand Skateside Skates Ltd commercialized this pack of knee / elbow / wrist guards & sports bag in 2001 in collaboration with Eidos Interactive. The product packaging presented the aesthetics of Tomb Raider Chronicles, being protective elements for skating or skate of medium size ideal for teenagers or young adults.

I have been in charge of this section for several months now and I wanted to take this moment to thank you deeply for your visits and that you can dedicate your precious time to following this journey through the franchise. I am Rodrigo Martín Santos and if you are interested in collecting items about the franchise, I encourage you to follow me on my website or through Facebook. Next month we will analyze in depth the change of generation of Lara Croft, a revolutionary game that became the favorite or the most hated by its fans. What group do you belong to? Undoubtedly we speak of the never forgotten and controversial "Lara Croft Tomb Raider The Angel of Darkness" (2003).